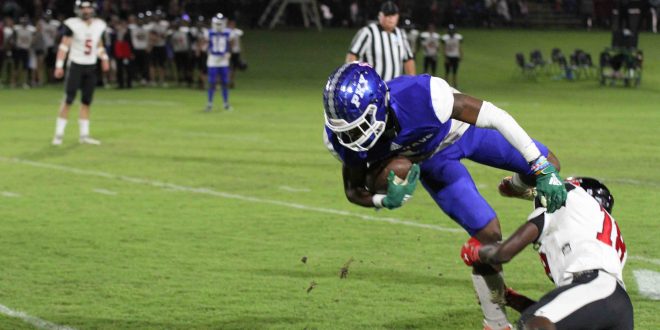 After making the catch, Jacobi Byrd leans to break the tackle against South Sumter.

After countless penalties, two ejected players, and a concussed receiver P.K. Yonge walked away from their season with a 3-7 record, yet thrilled.

The Blue Wave hosted the South Sumter Raiders for their triple threat of Senior Night, Homecoming, and the final game of their season. Unfortunately for the home team, the game was ended with 1:10 left in the fourth quarter, down 44-29.

“We had a ton of fun tonight,” coach Marcus McDonald said. “My guys never backed down.”

Within three minutes of the game, Aaron Small for P.K. Yonge was sacked in the end zone, putting the Raiders up 2-0. Exactly a minute later, Dylan Morrison punched in the first touchdown of the game. 9-0 South Sumter.

The Blue Wave attempted to retaliate with a field goal, but the kick was no good, keeping their side of the scoreboard blank for the first quarter.

Getting the Ball Rolling

Billy Wallace for the Raiders ran in the next touchdown, but P.K. Yonge answered back with a safety. Putting them on the board at 16-2.

“On offense, I feel like we could have prepared better,” PK Yonge quarterback Aaron Small said. “I feel like the team, we are going to grow together and get better. We have a lot of young players and we’re just going to get better for next year.”

With under five minutes left in the half, both teams found the end zone. After a fumble by Small, Wyatt Mandahl had a 10-yard rushing touchdown on the next drive. Kelvin Edwards proceeded to run in a one-yard touchdown, placing the Raiders in the lead 30-2 with a minute left in the half. However, that was plenty of time for quarterback Small to take a 63-yard run into the end zone. With 25 seconds remaining in the half, P.K. Yonge trailed 30-9.

One yard rushing touchdown for K. Edwards for the Raiders. 1:10 left in the half and Sumter continues to lead 30-2 @ESPNGainesville @PKYFootball pic.twitter.com/2BiD3BwROc

Following the Homecoming halftime celebration, the Blue Wave came out hot as Small ran for another touchdown; making it 30-15 with 11:04 remaining in the third.

Rushing touchdown by Aaron Small to make the score 30-15 after a failed 2 point conversion. 11:04 left in the third. @ESPNGainesville @PKYFootball pic.twitter.com/Zx475ecYBY

In less than five minutes though, the Raiders drove back downfield. Malachi Presley got the score, followed by a 12-yard touchdown pass a few minutes later.

P.K. Yonge kept up an aggressive game through the final quarter, putting two more touchdowns on the board and not giving up any more points on defense. First, a 45-yard score by Christian Jones. Then, a 20-yard pass from Small to Jacari Byrd, followed by a two-point conversion from Taylor Kendrick.

Several personal foul penalties were called during the last quarter. “We were playing physical and aggressive football and I don’t know why we were getting penalties,” McDonald said.

So, after a particularly direct interaction between players on each team, the coaches and officials agreed to call the game early making the final score  44-29. The Blue Wave left the field with another loss but celebrated as though they won the championship.

“My guys played aggressive and I have not seen them play that hard all season long,” McDonald said. “It’s a shame because we don’t have another game left. I don’t care about the results, I loved the way they played.”

Rylee is a fourth year journalism major with a specialization in sports and media at the University of Florida College of Journalism and Communications.
Previous Ty Corbin’s Four Touchdowns Lead Chiefland Past Williston 42-8
Next What Georgia loss says about Florida’s place in top-10

The high school football regular season has come to an end. And tonight, numerous teams …