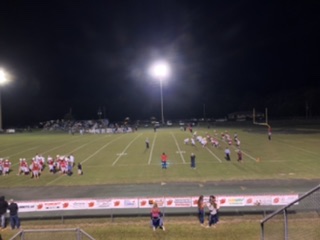 On a chilly first night of November, the Williston Red Devils (1-8) played host to their cross-town rival, the Chiefland Indians (5-4) in a well-anticipated season finale. The game started out slow, but things picked up when Williston went for it on 4th and 5 at the Chiefland 10 yard line.

Junior quarterback Tiger Days, ran a draw but was stopped just short of the first down line. Pinned inside their own 10-yard line, Chiefland running back Sedrik Moultrie broke out for a 35-yard run to give the Indians some breathing room.

A few plays later, Chiefland’s offense kept the drive alive by converting on fourth down and inches near midfield. Now in Williston territory, the Indians scored a 35-yard touchdown on a magnificent run by senior quarterback Ty Corbin. However, the touchdown was negated by a holding penalty, which backed up the Indians to the 45-yard line. Following the penalty, the first quarter ended scoreless.

The Williston defense took advantage of the holding call as Chiefland faced a 4th down and 37. In spite of this, Ty Corbin came just inches shy of a first down on an impressive 36-yard run. Williston’s offense could not get anything going upon getting the ball back and were forced to punt.

Following the punt, a personal foul was called against the Red Devils, which set up a very short field for the Indians. Starting its drive on the Williston 15-yard line, Chiefland needed just three plays to find the end zone. Sedrik Moultrie bulldozed his way in for a five-yard touchdown to give the Indians a 6-0 lead.

In an attempt to answer Chiefland’s touchdown, Williston’s Edariyon Wesley fumbled the ball on the first play of the Red Devils’ drive. Defensive end Jake Kline recovered and the Indians didn’t waste any time capitalizing on Williston’s mistake. Immediately after the fumble recovery, Corbin ran 3o yards for a score and Chiefland converted a two-point conversion to expand their lead to 14.

Williston’s offense got things going when a 30 yard run up the middle by Jacurtis Pitts that set up first and goal for the Red Devils. Two plays later, however, they turned the ball over once again. This time, Chiefland’s Scott Hysmith recovered the fumble. Before the end of the half, Chiefland made one last push for a score. As time expired, Corbin threw a 28-yard touchdown pass to Moultrie in the back left corner of the end zone. An unsuccessful two-point conversion followed, and the half ended with a comfortable 20-0 Chiefland lead.

The Indians came out of halftime showing no mercy as Ty Corbin scored his second rushing touchdown of the night on Chiefland’s opening drive. Corbin weaved through multiple defenders en route to finding the end zone in what was arguably the most impressive touchdown of the night. The two-point conversion was good, and Chiefland took a 28-0 lead.

On the first play of Williston’s next drive, they turned the ball over again in what amounted to be a recurring theme for the Red Devils. Jacurtis Pitts fumbled the ball, and Ty Corbin scooped it up for the Indians. Three plays later, Corbin threw a three-yard touchdown pass to senior wideout, Zac Hall. The point after was good, giving Chiefland a commanding 35-0 lead.

Chiefland opened the quarter by eating much of the clock and pounding the rock. The Indians gained a lot of chunk yardage and capped off the drive with a 20-yard rushing touchdown by freshman Paul Davis. The extra point gave Chiefland a 42 point lead.

With a running clock, Williston maintained their pride and tried to break the shutout. They succeeded in doing so thanks to a 63-yard touchdown pass from Tiger Days to Marland Williams. The game ended following Williston’s two-point conversion, which made the final score 42-8 Indians.

With a loss, Williston drops to 1-9 for the season and finishes in last place in the district. Its defensive struggles continued, but perhaps the most glaring issue for the Red Devils was turnovers. Williston had three costly turnovers in tonight’s game that could’ve swayed the outcome immensely had they not occurred.

For Chiefland, a win improves their record to 6-4, which keeps them in fourth place in the district standings and in the playoff hunt.

Hi, my name is Griffin Foll and I am currently a senior at UF studying sports media journalism with a concentration in political science. I contribute weekly web and radio content for WRUF ESPN Gainesville and help cover the World Cup/Champions League soccer beat. Be sure to check out some of my recent articles!
Previous Gainesville Beats Eastside 31-18 in Season Football Finale
Next P.K. Yonge Football Loses Final Game of the Season to South Sumter 44-29

Without hesitation, Newberry guard Mason Smith shot the ball from the left corner with the …