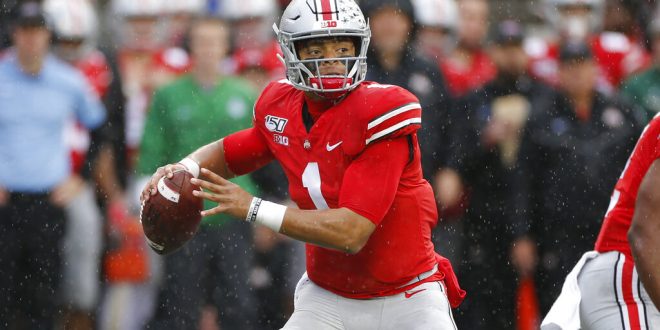 Ohio State In The Drivers Seat For CFP

After being ranked number one in the initial College Football Playoff rankings, Ohio State still has a ways to go before the season comes to an end.

The Buckeyes are headed into the thick of things when it comes to Big Ten action. Ohio State will go up against Maryland, Rutgers, Penn State and Michigan. The Nittany Lions, like Ohio State, are right there in the playoff mix. In fact, if the playoffs began today, Ohio State would go up against Penn State in the Fiesta Bowl. You have to be feeling pretty good if you are a Buckeyes fan. According to ESPN’s Playoff Predictor, Ohio State has a 85% chance of making the final four and a 36% chance at winning the national championship.

One of the main reasons why everyone expects Ohio State to make a deep run is because of quarterback Justin Fields and defensive end Chase Young.

Both players are having phenomenal seasons and could be in New York for the Heisman ceremony in December. Young is performing at a level that the college football world has not seen in a very long time. With 13.5 sacks on the season, Young is one sack away from breaking the Ohio State record for sacks in a season. He is expected to push for the all-time NCAA sack record (24). There is a reason why Young has a case to be the first defensive player to win the Heisman since Charles Woodson in 1997.

"Chase Young is clearly going to be the top overall prospect in the NFL draft… He not only can, but potentially will win this Heisman Trophy. It's a real thing." — @JoelKlatt pic.twitter.com/Qz1jTKha1D

Young’s teammate, Fields, is doing big things in his first season as a Buckeye. The former Georgia Bulldog has thrown for over 1,600 yards along with 24 touchdowns. Fields is also getting the job done with his legs. The sophomore has 319 yards on the ground en route to finding the end zone nine times.

Led by the dynamic play of Fields and Young, the Buckeyes will be a force to reckoned with the rest of the season. 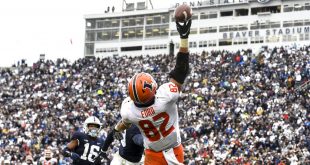 Week eight of the college football season brought some shakeup to the AP Top 10. …