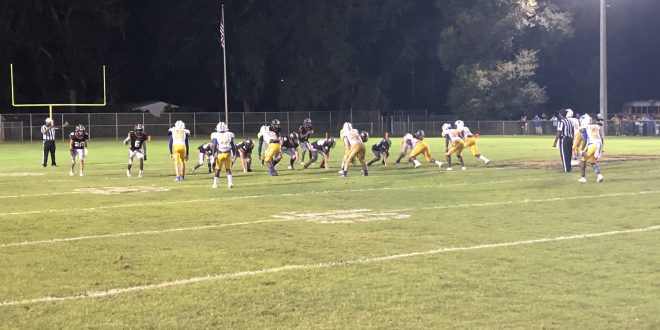 Newberry defense lines up against the Trenton Tigers in the fourth quarter of their 22-0 win.

Newberry head coach Edward Johnson called the break in between games anything but a free ride.

“This is not a vacation,” Johnson said, “we still have business to take care of.”

Those were the words Johnson told his team after a double-overtime thriller over Fort White, two weeks ago.

While the 2019 FHSAA Class 1A Football State Championships started this past weekend, Newberry performed well enough in their 10-game regular season to earn a first-round bye.

In fact, the Panthers are riding a nine-game winning streak.

Even though two of those nine games are 1-0 forfeit wins, they have outscored their opponents by 187 points in the other seven games. The nine game win streak comes after a season-opening loss to Santa Fe High School, 22-7.

In their two-week hiatus, Johnson wanted his players to use the time to get healthy and prepare for a playoff grind.

“Enjoy your time,” he said, “but remember to use that time wisely, get healthy and begin preparing.”

Newberry is one of four teams to receive a first-round bye, the others being Blountstown, Baker, and Madison County.  The Panthers will take on Chiefland Friday, after Chiefland beat Trenton to advance in the playoffs.

Chiefland is another team that has been hot coming into this game. Including their first-round win over Trenton, the Indians have won their last six games. For comparison, they have outscored their opponents by 173 on their streak.

This game will be the second round of the regional playoffs, and what is effectively the round of 32 for the state championship.

This is a game between two high-power offenses that have a combination of air and ground games. The winner of this playoff game will need to somehow find a way to slow down the opposition.

These two do have four common opponents that they played in the regular season, and the one postseason game in Chiefland’s case.

Chiefland is 4-1 in their five games against Dixie County, Trenton (twice), Williston and Hamilton County. Newberry is 4-0 against those opponents this year.

The winner will move on to the “Sweet Sixteen” and the Regional Finals to take on the winner of Hawthorne and Pahokee.

Originally from Seminole in the Tampa Bay area, Kyle is a contributor for ESPN Gainesville as well as local NPR and PBS affiliate WUFT. Kyle wants to get into sports with a lofty dream of being a sports broadcaster. He was raised playing soccer and baseball while watching hockey and football, so the knowledge about various sports is fairly extensive.
@KyleFanslerUF
Previous Santa Fe Women’s Basketball Faces Indian River State College
Next FSU Upsets No. 6 Gators 63-51