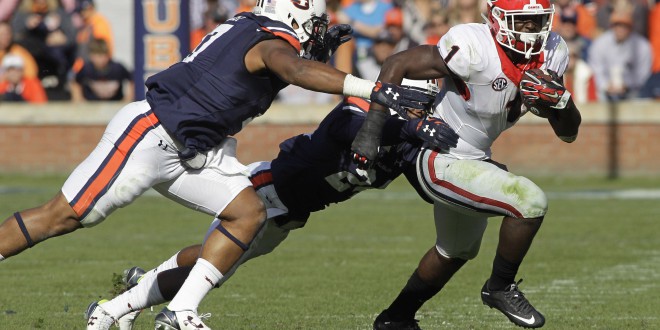 No room for error for Georgia against Auburn

Georgia hasn’t locked up the SEC East just yet. It’s a long shot, but it’s still possible for the Bulldogs to slip up and allow Florida to take control. Even though Georgia only has two conference games left, there’s very little margin for error especially in the race to make the college football playoffs.

The Gators need to beat Missouri this weekend and hope the Bulldogs fall against Auburn and Texas A&M, which isn’t a far fetched idea.

Just have this feeling @AuburnFootball is going to spoil someone’s playoff party… pic.twitter.com/SN9FCQcAen

It appears the upset loss to South Carolina is just what Georgia needed. While Georgia does need to be error free the rest of the way, the Bulldogs are the fourth ranked team and in a spot to reach the playoffs. They’re also playing some of their best football right now. With only 17 points allowed in the last three games, all against Florida, the Georgia defense has been tough to break.

Georgia is the only team, throughout all levels of college football, that has not allowed a rushing touchdown so far this season. pic.twitter.com/0EbhV0cJ4t

That could spell disaster for the twelfth ranked Auburn Tigers this weekend.

Auburn has only faced one top-15 defense so far this season (Florida) and was held to under 300 yards. The offense has looked ugly relying on a freshman signal caller. Bo Nix has struggled with accuracy throughout the season. In his four games against ranked teams, he has a completion percentage of 45.1%. Now, yes, all four of those games have been on the road, and a hostile environment is sure to rattle a freshman quarterback. Even so, it would be reasonable to expect more of the same from Nix, especially because the Bulldog defense will be the best defense he has faced all season.

Georgia has been very efficient at stopping the run. Auburn needs to get its passing game going if it hopes to have any shot of winning. The Bulldog defense has allowed Murray State and Tennessee to throw for over 250 yards during the season. A two dimensional offense will be the key.

Both teams average over 200 yards running the ball and have top-25 rushing offenses. However, Georgia’s rush defense is fourth in the country. Whichever team is able to rush the ball effectively will likely come out on top. Auburn head coach Gus Malzahn believes the Tigers’ rushing offense versus the Bulldogs stout run defense will be an important matchup in the game.

If Auburn can’t get anything going on the ground, even more pressure will be put on Nix to drive the offense down the field. The Bulldogs may also struggle to throw the ball due to multiple injuries to their receiving core. Four wide receivers are on the injury report this week, including top wideout Lawrence Cager.

The big question mark hangs over the head of lead running back JaTarvious Whitlow. He was the Tigers top rusher before going down with a knee injury against Florida. Whitlow had surgery soon after and was cleared to play against LSU but has only received three touches since. If he’s still not ready by kickoff, the Tigers will once again rely on freshman D.J. Williams to carry the load.

We know Georgia needs to win at least one more conference game to claim the SEC east. The Bulldogs also need to be error-free if they hope to earn a spot in the college football playoffs. Even though a ton of pressure is on Georgia to win, head coach Kirby Smart is treating it like every other game of the season.

Meanwhile, Auburn is still fighting for a chance to play in a New Years Six bowl. There’s a lot on the line with just a few weeks left in the regular season. Auburn could play spoiler.