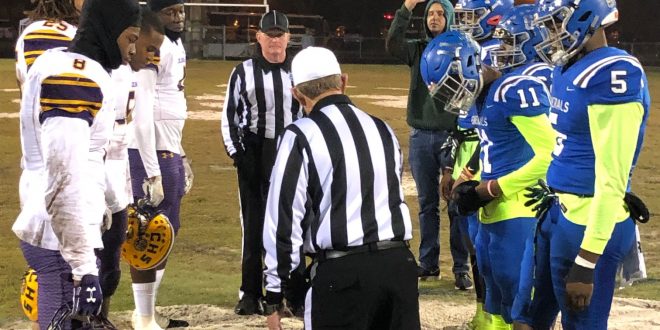 By: Jake Lehman and Nicholas Anschultz

The Tigers dropped a 6-3 double-overtime battle on the road to rival Robert E. Lee, on a night when defense ruled.

Stout Defense on Both Sides

The ugliness of the final score is indicative of two defenses that largely dominated from start to finish.

Jordan Smith finished the night around 150 yards short of his season average through the air, as an extremely talented Lee secondary made it a rough go.

Lee sophomore cornerback Jaheim Singletary is already listed as a 5-star recruit, and he was instrumental in Lee’s effort to neutralize USF commit Marquez Bell.

A key moment came late in the 3rd quarter when another highly-touted Lee cornerback – Larry Smith – broke up a pass in the end zone to complete a goal-line stand.

Lee comes up with a tremendous goal-line stand after turning it over at their own 5. After Zach Williams’ kick was no good for Columbia, it’s still scoreless. 2:26 Q3. @ESPNGainesville @sports_CHSLC @ThePrepZone @FlaHSFootball pic.twitter.com/2nbKZffDAC

Columbia’s defensive performance was also worthy of praise, with a second-straight dominant effort after a poor finish to the regular season.

Lee was held just under 200 yards of total offense, and the Tiger defense repeatedly stood strong despite little help from the offense.

Lee Nearly Ends it in Regulation

After struggling to move the ball for most of the night, Lee’s offense found a spark at a crucial time.

With just under 8 minutes remaining in the fourth quarter, the Generals put together their longest drive of the evening.

Columbia didn’t see the ball again until overtime, as Lee was able to string together five first downs on the methodical drive.

Lee head coach OJ Small decided to trust his offense on a 4th down with less than a minute left, and sophomore quarterback Cale Zarah connected on a huge pass play that placed Lee inside the 5-yard line.

Two run plays then had Lee knocking on the door, but failure to get a playoff on 3rd and goal from the 1-yard line sent the game to overtime at 0-0.

WOW. Columbia stops Lee just short with about 15 seconds left, and then the Generals failed to get another play off. So we’ll have overtime after 4 scoreless quarters. @ESPNGainesville @sports_CHSLC @FlaHSFootball @TigerTownCHS @ThePrepZone pic.twitter.com/yAnLXYjiZe

Something’s Gotta Give in OT

The defenses continued to dominate in the first overtime period, as USF commit Le’Vontae Camiel sacked Cale Zarah on 4th down to end Lee’s opening drive.

After a timeout, Lee brings out the offense on 4th and @LevontaejCamiel comes up with the CLUTCH sack for Columbia. Any points will win the game now for Columbia. @ESPNGainesville @TigerTownCHS @ThePrepZone @sports_CHSLC @FlaHSFootball pic.twitter.com/7wKcwAhpze

Columbia then took over with the chance to end it, but the offense was again out of sync, and Zach Williams missed a potential game-winning field goal.

After a timeout, Lee brings out the offense on 4th and @LevontaejCamiel comes up with the CLUTCH sack for Columbia. Any points will win the game now for Columbia. @ESPNGainesville @TigerTownCHS @ThePrepZone @sports_CHSLC @FlaHSFootball pic.twitter.com/7wKcwAhpze

Williams was able to redeem two previous misses with a 32-yarder on the ensuing possession, but it proved too little, too late.

The game came down to a 4th and goal from the 4-yard line, and Cale Zarah found a soft spot in Columbia’s zone to hit Timothy Gallion for a walk-off score.

For the Tigers, the dream of a state title under Brian Allen remains a dream.

It was a rollercoaster season for Allen’s team, starting off 6-0 and atop Class 6A.

But Columbia lost three out of its next four games to end the regular season, starting with a turnover-riddled loss on this same field to Lee.

The defense that got lit up down the stretch was much improved in the postseason, but a lack of offense Friday night resulted in another season-ending loss to their rival.

When reflecting on the loss after the game, Allen praised his senior class and stressed that he will cherish his memories with them.

“I’ve seen a bunch of young men grow up right before my eyes,” he said. “I’m going to remember that this team matured.”

“I’m going to remember a group that may have not had in this era all the four and five stars, but they came to compete every year,” Allen said. “It’s a lot of great memories this team has made over these years that they’ve been here as a group.”

For Lee, the hunt for a state title takes them up to Pensacola for the Region 1-6A final against the unbeaten Escambia Gators.