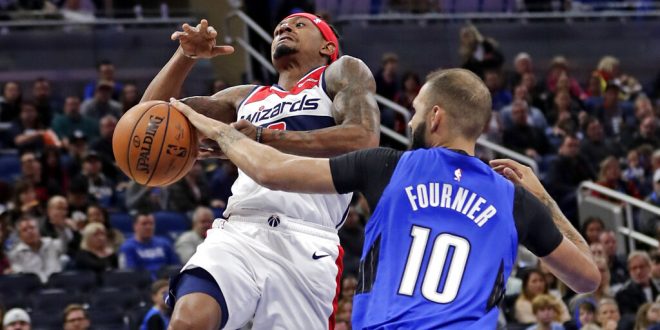 Orlando Magic's Evan Fournier (10) knocks the ball away from Washington Wizards' Bradley Beal, left, who was going up to shoot during the first half of an NBA basketball game, Sunday, Nov. 17, 2019, in Orlando, Fla. (AP Photo/John Raoux)

The Orlando Magic picked up their third-straight win Sunday night with a 125-121 victory over the Washington Wizards in the Amway Center. Nikola Vucevic led his team with a 30-point, 17-rebound double-double. Former Gator guard Bradley Beal put up 34 points and eight assists in 40 minutes, but it wasn’t enough to get his team the win.

Vucevic is 1 of 5 players in Magic history with games of 30/15/5.#MagicAboveAll

The Magic had an 88-77 lead over the Wizards heading into the fourth quarter. That’s when both teams started scoring for fun.

What was once an 18-point lead for the home team, the Wizards closed the deficit to 117-116 with 1:01 remaining on the clock. Vucevic responded with a pair of free throws. On the following possession, Beal threw the ball away to Markelle Fultz. Fultz ran down the court and finished off the dunk with contact from Davis Bertans. Fultz then put away the free throw to make the score 122-116 with 36.1 seconds left. At that point, the game was essentially over.

Washington outscored Orlando in the final quarter 44-37. Beal put up 15 of his 34 points in the fourth quarter alone.

The Magic picked up nearly 20 percent of their total points from the free-throw line. Of 26 total attempts, Orlando’s players converted 24. Washington finished the night 10-12 from the stripe.

The Wizards’ efficiency from three-point territory kept them in the game. As a team, Washington shot 19-41 (46.3 percent) from behind the arc. C.J. Miles put away 6-7 from three, and Beal and Bertans added five more each on 5-10 and 5-11 respectively.

The Magic had a sharpshooter of their own. Evan Fournier scored five of his eight attempts from three on the night. He finished with 25 points and nine assists on 7-13 from the field.

Vucevic got in on the action, shooting 3-4 from deep.

With their three-straight wins, the Magic now sit at eighth in the Eastern Conference with a 6-7 record. Washington is 14th at 3-8.

The Magic’s next game is Wednesday at 7:30 p.m. against the Toronto Raptors at Scotiabank Arena.