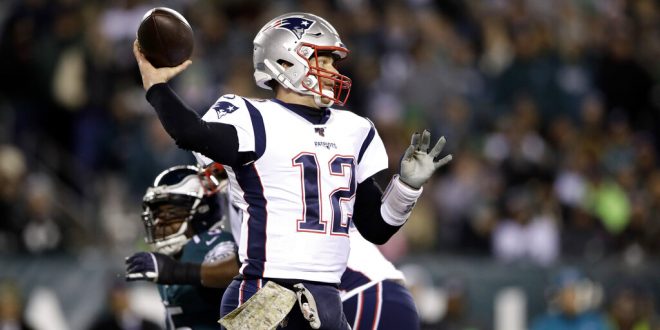 New England Patriots' Tom Brady passes during the first half of an NFL football game against the Philadelphia Eagles, Sunday, Nov. 17, 2019, in Philadelphia. (AP Photo/Matt Rourke)

Now that Week 11 of the NFL has come to an end, The AFC is tighter than it seems. With a lot of talent all around, the playoff picture in the AFC can change with only six weeks left in the regular season. With powerhouses like the Patriots and Ravens, we will be looking at a two-team race for the number 1 seed.

There isn’t much to say when it comes to this team and the success they have had in the past two decades. Tom Brady continues to be dominant even without Rob Gronkowski in the picture anymore. However, the Patriots won a close game against the Eagles last week, with a last-minute defensive drive to win 17-10. The Patriots have one of the hardest schedules in the second half of the season. New England will face the Chiefs, Cowboys and Texans in their next three games. That stretch could stir up the AFC for the number 1 seed.

With the MVP front-runner at quarterback in Lamar Jackson, anything seems possible for this Ravens team. Jackson and the Ravens have been able to beat some formidable opponents in the Seahawks, Texans, and the Patriots. They play the Rams, 49ers, and the Bills in their next three games. In the end, one loss could be the difference between the number 1 and number 2 seed for this team.

With the reigning MVP in Patrick Mahomes, the Chiefs are still in a good spot. Mahomes and company won a tough game on Monday night against the Chargers by a score of 24-17. Wide receiver Tyreek Hill sustained an injury against the Chargers, and it is unknown how long he will be out for. The Chiefs have a Week 12 bye, then a Week 13 matchup against the Raiders.

After a Texans’ loss to the Ravens, the Colts shot up to the AFC South division lead. The Colts beat the Jaguars during Week 11, winning by 20 points at home. With an upcoming matchup in Week 12 against the Texans, a win is much needed for this team to keep their spot in the playoffs.

The Buffalo Bills have a solid record but have not fought against big teams. In the top 6 teams, the Bills have the easiest strength of schedule. The Bills play two more games against teams with a losing record, but then play the likes of the Patriots and the Ravens.

The Texans have a lot of talent on their offense, including Deandre Hopkins and quarterback Deshaun Watson. Watson and the Ravens were held to only seven points against the Ravens, their lowest total all season. However, Texans play the Colts in Week 12, which could bump them up a spot in the rankings with a win.

Previous Without Tagovailoa, Alabama Will Finish the Season with Mac Jones
Next Lamar Jackson Continues to Amaze