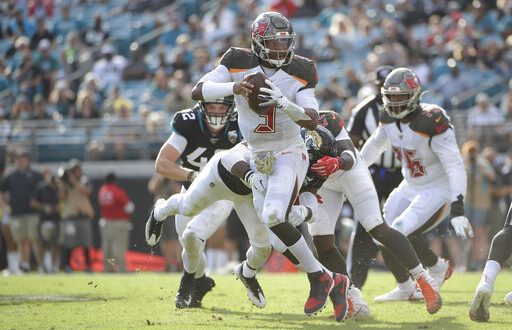 Tampa Bay Buccaneers quarterback Jameis Winston, center, scrambles from the pocket during the second half of an NFL football game against the Jacksonville Jaguars, Sunday, Dec. 1, 2019, in Jacksonville, Fla. (AP Photo/Phelan M. Ebenhack)

The Tampa Bay Buccaneers took the NFL by storm with their last two victorious matchups.

The team had an undeniably slow start to the season. They had a semi-successful preseason where they only lost one game 28-30 against the Pittsburgh Steelers. However, the Bucs slid into a 3-7 record after the Week 11 loss against the Saints. The two most recent games, on the other hand, allowed the team’s defense to shine on the field. In Week 12, they faced the Atlanta Falcons, sweeping them 35-22. Head Coach Bruce Arians explained postgame that he could see the defense strengthening.

In the most recent week, they defeated the Jacksonville Jaguars on the road 28-11. They were able to outscore both opponents by a combined 63-33.

A linebacker even made history during last Sunday’s battle against the Jags. Rookie Devin White was able to break records in just the first quarter, resulting in the Bucs’ 15-point lead early on in the matchup. He was the first rookie in the Tampa Bay franchise to get an interception, fumble recovery, and a touchdown all in one game.

In addition, another notable player on the field was quarterback Jameis Winston. In the game against the Falcons, he put up 313 passing yards and three touchdowns. He was involved in two of the most memorable plays of the match. This includes his pass to wide receiver Chris Godwin that resulted in the team’s first touchdown of the game. It was an impressive 71-yard bomb. Winston also showed off his ability to quickly swerve his opponents, before hurling the ball to wide receiver Mike Evans.

Besides Godwin’s catches, one of the best plays of the game here. Note how the play-action, despite the #Bucs’ lack of rushing efficiency, pulled the #Falcons defense to the line of scrimmage. https://t.co/gGRARYLCRW

Tampa Bay is traveling back home to go head-to-head with the Indianapolis Colts this Sunday at 1 p.m. With the Bucs going into this game on a high after their two-win streak, the Colts are entering on a two-game losing streak. They just recently lost a 17-31 battle against the Tennessee Titans on their home turf. 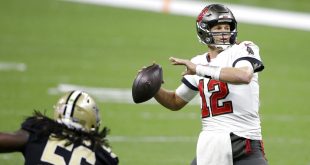