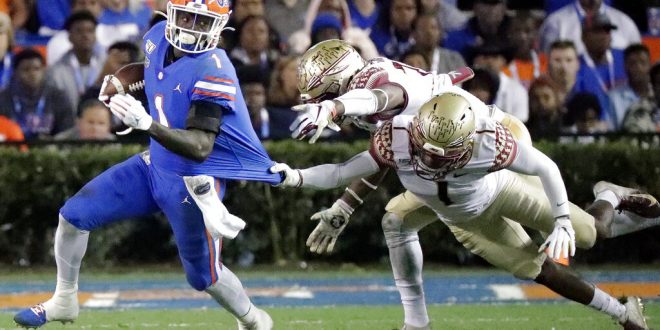 The University of Florida football team is in prime shape to be placed in a New Year`s 6(NY6) bowl for the second time in two years.

What has changed the NY6?

The Tigers’ (9-3) won the Iron bowl versus the Crimson Tide. This has left the door open for the Gators (10-2) to climb. Alabama`s (10-2) ranking has dropped to the No. 12 spot behind the Gators and Auburn. Consequently, this has pushed Alabama out of contention for the NY6.

Where the Gators sit in the rankings

Gators are most likely to be placed in the Orange, Sugar or possibly the Cotton bowl.

The Gators have been up and down the totem pole but have landed safely in the No. 9 spot in the CFP Rankings, which is really where it matters.

The Florida squad can possibly climb up the rankings if Georgia gets stomped in the SEC championship game. This weekend will be the deciding factor to solidify the CFP Rankings and could potentially land the Gators as the highest SEC team beside LSU.

If LSU beats Georgia marginally, then Georgia stays ranked above the Gators and the Bulldogs would take the Sugar Bowl.

Bulldogs in the Sugar Bowl would leave Florida in the Orange Bowl to face No. 23 Virginia.

Meanwhile, Wisconsin is slated to play Ohio State in the Big 10 championship. The Gators would shift down in the off-chance that Wisconsin wins. A win for Wisconsin would most likely slot them for Orange Bowl.

The excitement and uncertainty of the bowl games has left twitter filled with predictions.

I'll have a story on it tonight, but Gators are all but assured a NY6 Bowl game.

Sugar will take either Georgia or Florida and unless something crazy happens (Ohio State losing Big Ten Championship) they will get a Cotton or Orange Bowl bid.

What NY6 means to the Gators

The biggest factor, besides clout, is recruiting.

With two NY6 bowls in the last two years, certainly Florida is once again establishing themselves as a dominant football program.  We will see the effects in the 2021 season when the recruits start stepping on the field.

This is also a huge accomplishment for Dan Mullen. In his second season, he has shown UF fans that he is the right man for the job.

Above all, Florida Gator football fans are happy.

Hey! I am a telecommunications major with a specialization in video production. I aspire to film documentaries with extreme athletes traveling around the world.
Previous The Heat look to snap the Celtics perfect home record
Next ACC Championship: Virginia takes on Clemson