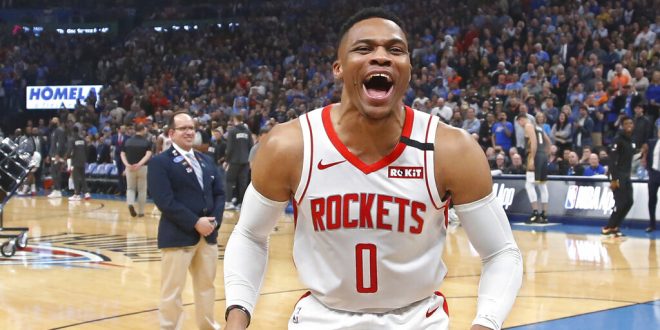 The Oklahoma City Thunder dealt Russell Westbrook to the Houston Rockets this offseason in one of the summer’s biggest deals. Last night, he returned to OKC for the first time since his departure to receive a standing ovation from Thunder fans. The Thunder even honored him with a tribute video recapping his years with the team.

However, for 48 minutes, the Thunder dominated the game en route to a 113-92 win over the Rockets. Nonetheless, before and after the game, the spotlight was on Westbrook and he returned the love to his fans.

Westbrook arrived at the game wearing a sweatshirt with the word, “No Regrets” written on the front. On the back, Westbrook listed his numerous accomplishments during his 11 seasons with the Thunder.

Despite their warm welcome to Westbrook, the Thunder showed no mercy to the Rockets on the court. Though Westbrook scored 34 points and shot 54% from the field, the Rockets struggled throughout the game. James Harden was held to 17 points on 5-for-17 shooting and the Rockets mustered to shoot 38.2% from the field as a team.

Danilo Gallinari dominated inside the paint for Oklahoma City, putting up 23 points and grabbing 11 rebounds. For the Thunder, it was a signature victory and one in which they brought full intensity and energy from start to finish.

After they lost Westbrook and star Paul George in the offseason, the Thunder found themselves with a virtually brand new team. However, Chris Paul and the new-look Thunder haven’t skipped a beat, as the veteran star is in All-Star form and the Thunder are on pace for another playoff appearance. The Thunder find themselves at 22-16 on the season, while the Rockets boast a 25-12 record.

Chris Paul relished his team’s performance on the court but loved the opportunity to square off against Westbrook.

Not only has Chris Paul emerged as a leader for the Thunder, but also young guard Shai Gilgeous-Alexander has stepped into a main role for the team. In just his second year in the league, he has emerged as a fine protégé to Paul, averaging 19.8 points per game on 46.4% shooting.

On Thursday night, the Thunder were simply more balanced as a team, featuring five players in double figures. Meanwhile, Westbrook and Harden struggled in getting the ball out to their teammates.

For OKC, the win was a great sign of good things to come. For the Rockets, it was a note of important lessons to build on.

Regardless, Russell Westbrook’s return to Oklahoma City came with all of the pomp and circumstance that the veteran’s time with the Thunder should have garnered and both sides can look on peacefully to the future.

I'm a third-year student at the University of Florida passionate about storytelling and sportswriting. My goal is to work in communications for a professional sports team after I graduate.
Previous Playoff Preview: Vikings Visit 49ers in Divisional Round
Next Three Former Gators Return with Team USA for Exhibition Game