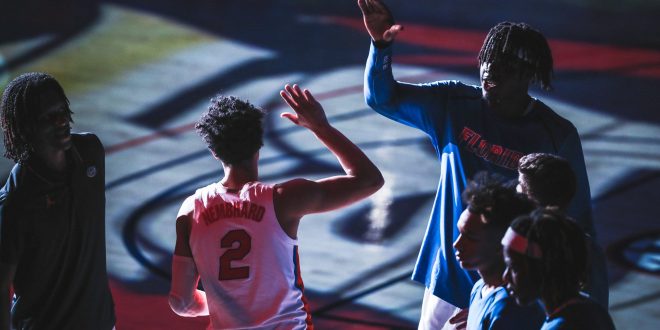 Riding a defensive showcase against Ole Miss, the Florida Gators men’s basketball team faces one of it’s toughest challenges yet this season as they hose the No. 4 Auburn Tigers.

Auburn (15-1) is still reeling from an upset loss to unranked Alabama in Tuscaloosa on Wednesday, Jan. 15. Against the Crimson Tide, the Tigers were thoroughly outmatched as they lost by 19 points and turned the ball over 21 times.

Florida, on the other hand, is fresh off of a 16-point win against Ole Miss that saw the Gators get back on track defensively.

The last time these two teams met, the Tigers defeated the Gators in the SEC tournament semifinals, 65-62.

The Gators have not beaten a top-5 opponent at home since Dec. 23, 2006, against third-ranked Ohio State.

#Gators guard Andrew Nembhard tested positive for the flu. Didn’t practice yesterday and won’t today. His status for tomorrow’s matchup with No. 4 Auburn is up in the air. @ESPNGainesville

A potential key loss for the Gators comes courtesy of Andrew Nembhard and the flu. According to Gators head coach Mike White, Nembhard is a game-time decision for the Auburn game.

Breaking down the matchup

Prior to their loss at Alabama, the Tigers were undefeated, yet they were untested. After Alabama, Auburn showed vulnerabilities and weaknesses in their armor.

The Tigers struggled to score the ball, only totaling 64 points in a losing effort. It was not efficient either, as they only connected on their shots 31.7 % of the time. This showing is an outlier in an otherwise efficient season shooting the ball. Auburn currently ranks 14th in the country in two-point field goal percentage at 55.8% and 18th in points per game with 80.9.

Something that Coach White emphasized to the media is wanting to limit his team’s turnovers. According to White, his team cannot give up the “pick-six” plays, because Auburn will make them pay.

The Tigers’ impact player against Alabama, and a player to watch against Florida, is Austin Wiley. The senior center from Hoover, Alabama scored 10 points and grabbed 13 rebounds in their loss to the Crimson Tide.

Standing at 6’11 and 260 pounds, one of the only players on the Florida roster that can match Wiley’s size is Kerry Blackshear Jr. Wiley leads the Tigers in rebounds per game with 9.4 and is a large reason why Auburn is the 11th best rebounding team in the country.

Kerry Blackshear Jr. plays a key leadership role on this Gators team. This season, Blackshear Jr. has 7 double-double performances, which is the most since Dorian Finney-Smith had 8 in 2015-2016. He leads the Gators in scoring and rebounding with 15 points and 8.4 rebounds per game.

According to Blackshear Jr, this game provides an opportunity for younger guys to learn how to play in big games, while also providing an opportunity to build Florida’s resume.

Tip-off of Saturday’s game between the Gators men’s basketball team and the Tigers is at 1:30 p.m. on CBS.

Steven Walker is a beat writer for ESPN Gainesville and is currently studying Journalism & Sports Media at the University of Florida.
@swalker_7
Previous Georgia facing changes heading into 2020
Next No. 2 Florida Gymnastics Team defeats No. 19 Missouri to stay perfect