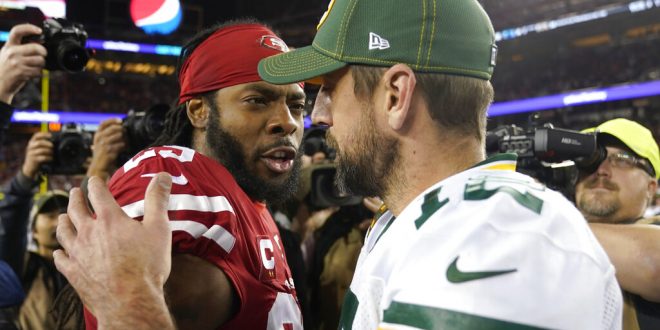 The San Francisco 49ers will host the Green Bay Packers in the NFC championship game, with the winning team moving on to Super Bowl LIV.

The 49ers won the NFC West with a 13-3 record. San Francisco is led by star quarterback Jimmy Garoppolo and defensive linemen Nick Bosa. Garoppolo has thrown 27 touchdowns in the 2019 season, tying for fifth, while also throwing for 3,978 yards. Bosa, the breakout rookie, has produced nine sacks, 16 tackles for loss and one interception for the 49ers.

The 49ers had a first-round bye and defeated the Minnesota Vikings 27-10 in the divisional round.

Garoppolo has a lot of respect for the Aaron Rodgers and the Packers as they get ready to face each other for the second time this season:

The Packers won the NFC North with a 13-3 record. Green Bay is led by quarterback Aaron Rodgers and running back Aaron Jones. The two have helped create one of the best offensive lines in the league. Rodgers has thrown 26 touchdowns and  4,002 yards in the 2019 season. Jones has registered 21 scrimmage touchdowns, the second-most in a single season, including postseason, in Packer’s history.

The Packers are riding on a six-game win streak that started after their loss to the 49ers in the regular season. Rodgers said that the mentality for the game is still the same regardless of the streak:

Green Bay had a first-round bye and defeated the Seattle Seahawks 28-23 in the divisional round.

These two teams have met 68 times previously, with the Packers leading the series 36-31-1. The last time these two teams met was during week 12 when the 49ers came away with a victory, winning 37-8. Garoppolo threw 14/20 and two touchdowns, while Rodgers threw 20/33 with one touchdown. 49ers’ linebacker Fred Warner had a team-high 11 tackles that game leading him to become NFC  Defensive Player of the Week.

Both teams have 11 Superbowl appearances between them. The Packers’ most recent Super Bowl was in 2011 when they defeated the Pittsburgh Steelers 31-25 with Rodgers being named Superbowl MVP. The 49ers most recent appearance was in 2013 when they lost to the Baltimore Ravens. Their most Super Bowl Victory was in 1995 against the San Diego Chargers.