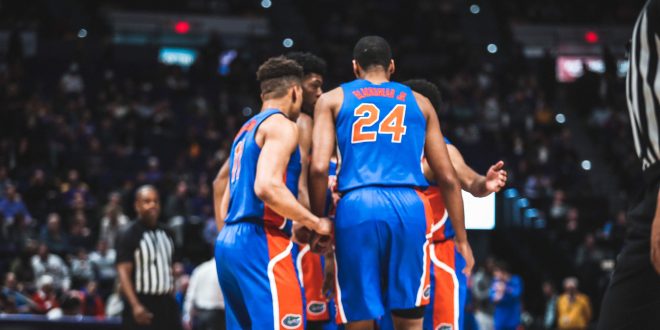 The Florida Gators men’s basketball team hosts the top team in the country on Saturday as they take on the Baylor Bears.

The Gators enter this match-up 12-6 and 4-2 in conference play. Florida’s last outing was an 84-82 heartbreaker where Keyontae Johnson could not beat the buzzer to send it to overtime.

Baylor is 16-1 and on a 15-game winning streak. The Big 12 powerhouse currently stands above teams like Kansas, and recently claimed the coveted top spot in the Top 25.

Back on our home court for a Saturday night. See you there?#GatorsHoop pic.twitter.com/mQ6umccM95

Despite being unranked, the Gators are 2.5 point favorites and have a 62.9% chance to win, according to ESPN’s Basketball Power Index. Florida defeated a fourth-ranked Auburn team on Jan. 18. Much being favored comes down to Florida’s home-court advantage. According to Florida’s Noah Locke, the home crowd gives the Gators energy.

“It’s great, just having everyone on your side,” Locke said. “In any situation, always having the crowd on your side is always great. It gives us a lot of energy. It just helps us out to be honest.”

Florida is looking to wipe the bad taste left from an at-the-buzzer loss to conference-rival LSU. Despite the loss, Gators’ head coach Mike White thinks there’s a lot of good to take away from the loss.

“The guys just continued fighting and swinging and we left a lot of energy out there on the court, and gave ourselves a chance to make it really interesting,” White said. “We were literally a split-second away form extending the game on the road with our backs against the wall.”

Florida has played the No. 1 team in the country 19 times in program history. In previous games, the Gators are 2-16 and 0-16 against number-ones in the regular season. Florida’s two number-one wins came in the NCAA tournament against Duke in 2000 and against Ohio State in 2007.

On Jan. 20, the Baylor Bears took the number one spot from Gonzaga in the Top 25. The Bears have one of the most impressive resumes of any team in the top five with five wins over Top 25 opponents. Impressive wins include over No. 17 Villanova, No. 12 Arizona, No. 18 Butler, No. 22 Texas Tech, and perhaps their statement win on the season over No. 3 Kansas.

Against Kansas, head coach Scott Drew’s Bears took over at the end of the first half and dominated the second as they would win by 12 over one of the nation’s best teams.

According to Coach White, Baylor deserves all of the praise.

“They’re terrific. Scott (Drew)’s got a really good team. They’re old, they’re deep, they’re tough, they’re versatile,” White said. “They’ve got… maybe the best backcourt in the country. Got to be in the conversation, if not the best.”

One thing Baylor does well, according to White, is rebound the ball. Baylor is the 11th best offensive rebounding team in the country and Florida’s Kerry Blackshear Jr. thinks that the Gators can attack the Bears there.

“We understand that they’re going to get some, they’re a long, athletic, really good team at that,” Blackshear Jr. said. “But if we continue to make everything a battle, I think we’ll come out similar to last week hopefully.”

Even more than offense, White says that the Bears defense is stifling. Baylor currently ranks 5th in the country in points allowed with only 58.5 points per game. Something Florida will have to do to down the No. 1 Bears is score with regularity. According to Coach White, his team’s offense has made leaps and bounds since the beginning of the season.

“Our shot selection is so much better than what it was early on and the overall understanding of just what we’re trying to accomplish when we have the ball,” said White.

In their last seven games, the Gators are averaging 83.4 points per game.

Tip-off of the Gators men’s basketball game against Baylor is at 8 p.m. on ESPN.