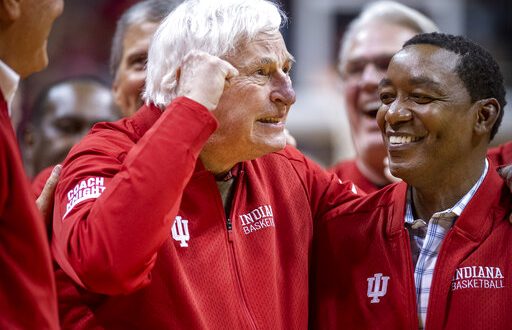 Former Indiana basketball head coach Bobby Knight, left, makes his first appearance at Indiana University since his dismissal in September of 2000. Knight, along with former player Isiah Thomas, right, are on the court during a ceremony with the Indiana players of the 1980 Big Ten championship team the halftime of an NCAA college basketball game, Saturday, Feb. 8, 2020, in Bloomington, Ind. (AP Photo/Doug McSchooler)

The legend of Bobby Knight is one Indiana Hoosier fans will always remember. Knight’s return to Assembly Hall on Saturday marked the end of a bitter twenty period the former head coach had with the university.

Knight, nicknamed the General, returned to Indiana for the first time since his firing in 2000. The General spent 29 seasons with the Hoosiers, earning three national championships and 11 conference titles.

The former Hoosier head coach joined his 1980 team at halftime of Indiana’s matchup against rival Purdue. A sold-out crowd of 17,222 greeted Knight with chants of “Bobby” and a standing ovation.

After spending three seasons as a forward for Ohio State, Knight began his coaching career as an assistant coach at Cuyahoga Falls High School in 1963.

After his firing in 2000, Knight coached at Texas Tech from 2001 to 2008. Through seven seasons with Texas Tech, Knight made four NCAA tournament appearances.

The three-time NCAA title winner established a winning tradition at Indiana University. The head coach went 662-239 during his career with the Hoosiers.

During Saturday’s game, Knight was joined by members of the 1981 title team. Former NBA head coach and Indiana basketball player Randy Wittman spoke about the legacy Knight left at Indiana.

While at Indiana, the General earned his induction into the Basketball Hall of Fame in 1991.