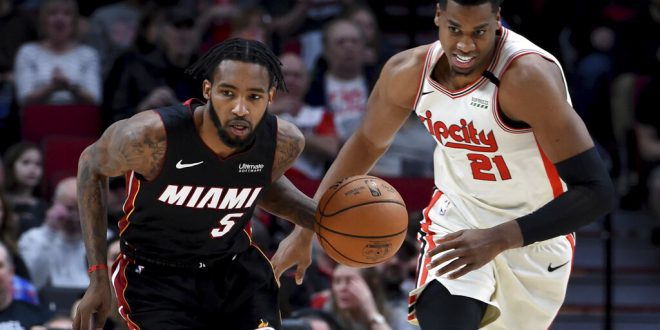 Miami Heat Lose on the Road to the Trail Blazers

The Miami Heat are now riding a three game losing streak after losing on the road 115-109 against the Portland Trail Blazers. The Heat is now 12-15 on the road.

Miami entered this game without Jimmy Butler, Tyler Herro and Meyers Leonard who had to sit down this game due to injuries.

Butler has been out with an injured shoulder since the team’s loss against the Clippers. Both Herro and Leonard are out due to ankle injuries.

This game served as a Miami debut for Andre Iguodala and Jae Crowder. Both players joined the Heat last week during the NBA’s trade deadline day.

Iguodala hadn’t made an appearance in the NBA since June 2019. He played 23 minutes and recorded two points, six rebounds, three assists, a steal and a block.

Crowder saw 35 minutes of playing time in which he was able to get 18 points, 11 rebounds, three assists and two steals.

“It felt like as if they were here for a while, not just joining us 48 hours ago,” Spoelstra said. “They are multi-dimensional two way players.”

The team leaders in this game for the Heat were Bam Adebayo, Goran Dragic, Duncan Robinson and Crowder. Dragic led the team with 27 points and seven assists, followed by Robinson, who got 19 points.

Right behind them was Crowder with 18 and Adebayo with 13 points, 12 rebounds, seven assists and three blocks.

Miami has two more games left in their six-game stretch of away games. Their next one will be on Monday against the Golden State Warriors. After that, they’ll go to Utah on Wednesday to face the Jazz. They will close this six-game stretch when they come back from break on February 20th and travel to Georgia to face the Atlanta Hawks.

Miami was able to overcome an 11-point deficit to take the lead in the second quarter. Then early on the third, the Blazers took back the lead.

In the final moments of the third, an overturned foul call on Damian Lillard sent the Portland guard to the free-throw line. Lillard made both shots, extending the Blazers’ lead to 10 entering the fourth quarter.

With just over five minutes left, the Heat was able to get within two points after a three-pointer from Dragic.

The Blazers quickly responded with a trey from Gary Trent. Lillard then hit a tough shot and converted a free throw to get Portland back to an eight-point lead.

The Heat was able to get within three with a basket from Adebayo, but this was quickly followed by a layup from Dillard with 25 seconds remaining.

Camila is a senior at the University of Florida, who served as a beat writer for the women's basketball team from 2019 until the 2021 season. She was also a beat writer for the Gators football team during the 2020 season. Camila is also WUFT's news director as well as a sports reporter/anchor.
@CamilaMaffuz
Previous Trlicek Tosses No-Hitter as Gator Softball Wins Two Games Sunday
Next Former Hoosier Head Coach Bobby Knight Makes Appearance at Indiana