It marks the 11th-straight season that head coach Kevin O'Sullivan's club has been ranked during the preseason in the nation's oldest college baseball poll, which began in 1959. Courtesy: Daniel Apple

The Florida Gators men’s baseball team will open their season for the final time this weekend at McKethan Stadium. The team is ranked fourth coming into preseason play. With Head Coach Kevin O’Sullivan entering his 13th season with the team, the coach is itching to wipe away the woes of last season and start fresh with this new team.

Just a season ago, the squad finished 34-26, making it to Regionals but falling short in unlikely fashion for a team who is a household name in Omaha. The struggles from last season started at the mound. O’Sullivan said, ” Our pitching was just not good. It’s that simple.”

However, this year the Gators look to find more consistency at the mound and power behind the plate. Adding some newcomers to the bullpen will add depth to the rotation and having more experience in the lineup should boost the Gators.

Putting the Pieces Together:

For now, the Gators are somewhat similar to a newspaper crossword puzzle. They have all the clues and boxes lined up. But not the hard part comes and it’s time to assemble the pieces together.  O’Sullivan hinted at tinkering with the lineup early on in the season to find the best order.

“The rotation a lot of times doesn’t stay the same throughout the whole year, and the same can be said for the lineup,” O’Sullivan said.

However, the head coach is confident he has all the right pieces to put together to solve the puzzle.  Heis still figuring out which pieces go where to find the winning combination.

Power in The Pitching:

A huge deficiency in last year’s team has the opportunity to become a strong suit for this year’s team. Junior right-handers Tommy Mace and Jack Leftwich will claim the Friday and Saturday starters slots.  The duo gained valuable experience a year ago and can be the anchors on the mound for the otherwise inexperienced bullpen. Both struggled mightily at times last year with consistency, but have the opportunity to show the development from the offseason and growth early on this season. Sophomore Nick Pogue, also a right-hander, got the nod for the #3 slot and will be the Sunday starter.

Also adding depth and a new look to the pen is freshman left-hander Hunter Barco. Barco was one of the highest prospects in the recruiting class and opted to enroll at UF instead of taking his draft offer. O’Sullivan said he wants to involve Barco early on and potentially use him in a starting role as well.

Some new additions to keep an eye on include left-hander Trey  Van Der Weide, a transfer from South Carolina Upstate as well as freshman righty Tyler Nesbitt from LaBelle High,  freshman right-hander Brandon Sproat coming from Pace High and finally freshman left-hander Ryan Cabaracas who will all add depth to the pen.

Also, expect to see a fresh face starting at shortstop. After graduating Brady McConnell last season, the heavily coveted position for the Gators will be held down by a freshman. Josh Riveria, hailing from IMG Academy was drafted in the 22nd round and instead decided to enroll at UF. O’Sullivan said he was the most resistant out of the coaching staff to start a freshman in the SEC at that position, but has since been convinced that Riveria is ready to handle the position.

Just a year ago, the bats were hot for the Gators. Even in their last game of the season against Dallas Baptist in the NCAA Regional, the Gators rallied to get within one after being down by seven runs at a point. According to O’Sullivan, the bats remain hot. “Collectively as a group, I’ve been pleased,” he said. O’Sullivan mentioned Austin Langworthy and Kirby McMullen as two guys who have been consistently swinging the bat well.  Sophomore standout and power hitter Judd Fabian suffered a concussion and had to undergo concussion protocol, but is back and is getting his swing back according to O’Sullivan.

The Gators will make their debut Friday at 6:30 p.m. at McKethan Stadium against Marshall. 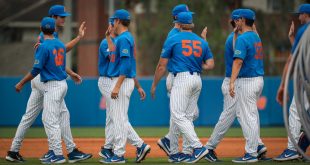 After a walk-off win against Florida State, the number Florida Gator baseball team (22-11, 6-6 …