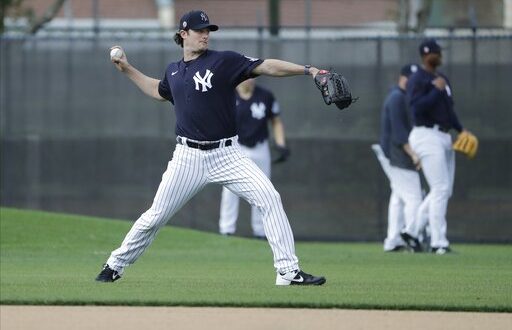 Cole is Happy to be a Yankee

Yankees newly acquired pitcher Gerrit Cole participated in his first formal workout with the team yesterday. Cole joined the team this offseason after signing a nine-year contract worth $324 million dollars (a record for a pitcher).

Cole is Ready to Get Started

The Yankees’ highly paid pitcher has experienced coming into a new team before. The Pirates drafted him first overall in the 2011 MLB draft. After five seasons of playing for Pittsburgh, he was traded in the offseason to the Houston Astros on Jan. 13, 2018. Cole recalls what it was like for him the first time coming into spring training on a new team.

Cole had a light first workout on Thursday. He fielded grounders off the mound,  threw in the outfield and in the bullpen

Onto a bullpen now for Gerrit Cole. Trust me, you’re going to want to turn your sound on for this one…#Yankees pic.twitter.com/mg3voqhPiT

The pitcher grew up a Yankees fan and wants to lead the team to their first World Series since the 2009 season. But in light of an exciting day, He also had to deal with questions about the Astros sign-stealing scandal in his post-workout news conference.

Answers for Some Tough Questions

Despite Cole not being a part of the 2017 World Series Champion Astros team that was caught with stealing signs, He still was asked about his involvement and his thoughts.

He also stated he was not aware of the cheating. Even though the MLB, during its investigation, did not find any findings of buzzers being used, some still believe that players like Jose Altuve used them this past season. Cole stands by his former teammates.

He has some teammates who have already openly disagree with their new pitchers’ belief in the Astros batters.

If you're headed to @GMSField at all for Spring Training, here's some important info for you to know. pic.twitter.com/06mK1Npi1E

Yankees Spring Training workouts will be happening all this week ending on February 20. On February 22, Yankees will play their first Spring Training game against the Toronto Blue Jays at 1:05 p.m. The organization has not released who will be pitching in that first game but don’t be surprised if Cole gets a couple of innings.

Previous Midseason Check-In: Reflecting on the NBA at the All-Star Break
Next Putting the Pieces Together: Florida Baseball Season Preview

Some things are bigger than baseball. Trey Mancini’s return to the Baltimore Orioles and to …