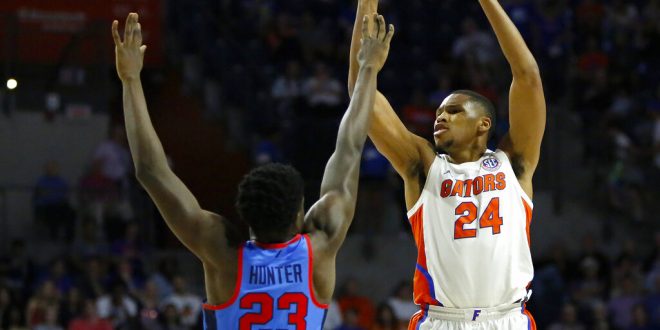 In what has been an up-and-down season for the Florida men’s basketball team, the Gators have finally begun to find their stride as of late. They look to keep this momentum going when they head to Knoxville to take on the Tennessee Volunteers Saturday afternoon.

Clicking at the Right Time

In their last five games, the Gators have been playing arguably their best basketball of the season. In that five-game stretch, Florida is 4-1 with wins coming against Texas A&M, Vanderbilt, Arkansas and LSU.

The only blemish came at Kentucky. In that game, the Gators stood toe-to-toe with the ‘Cats for most of the first half until a cold shooting slump in the second half left them heading back to Gainesville with their first loss in nearly two weeks.

Florida bounced back from this defeat in a resounding way on Wednesday when it defeated the LSU Tigers in dominating fashion, 81-66. With the win, the Gators’ NCAA Tournament hopes got a little bit of a boost heading into the beginning of March.

When asked if he feels his team is finally beginning to put all the pieces together, Gator head coach Mike White said he sees improvement, but his team still has more work to do.

White also went on to say that Wednesday’s game against the Tigers was one of Florida’s best games it has played in terms of sharing the ball with one another. This is something the Gators will need to continue to do Saturday when they match up against a tough ‘Vols defense.

A Glance at the ‘Vols

It’s been a rocky season for Tennessee. After totaling over 30 wins last year, head coach Rick Barnes has struggled to replace a talented senior class that was led by Grant Williams and Admiral Schofield.

The ‘Vols have dropped three out of their last four games coming into their match up against the Gators, with the only win coming over Vanderbilt on February 18.

But the ‘Vols have had the Gators’ number the last few seasons in this series, having won two straight going back to 2017. In addition, Florida has not fared well on the road against Tennessee, as it will try for its first win in Knoxville since 2013.

For one Gator player, it will be a homecoming come Saturday afternoon. Freshman guard Ques Glover returns to his old stomping grounds for the first time since signing with Florida.

He said he’s ready to perform in front of all his friends and family that will be in attendance.

The Gators have shown improvement from the start of the season to the end of February. And White couldn’t ask for a better time for his team to start putting it all together than now. The question is, can they finish these last three games the same way?

Florida and Tennessee will tip it off at 2 p.m. on ESPN2. After squaring off with the Vols, the Gators finish their season at Georgia and at home against Kentucky next week.