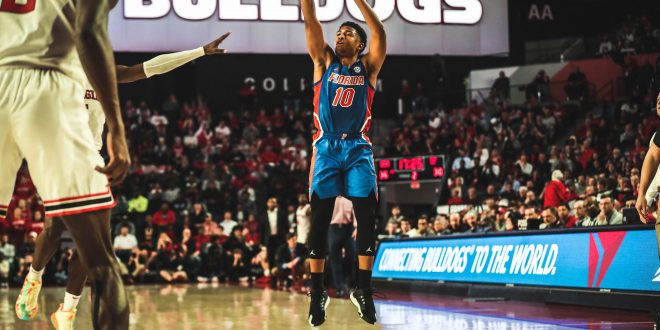 Gators Get Big Win at Georgia

The Florida Gators brought down the Georgia Bulldogs on their senior night 68-54 in Athens.

The Gators were down by as much as 13 in the game and came back, after tying their all-time comeback against Georgia earlier in the year.

Florida improves to 19-11 overall and 11-6 in SEC play. They will also move to second place in the SEC.

Keyontae Johnson earned his eighth double-double of the season. Johnson and Kerry Blackshear Jr. become the first Gator duo since Al Horford and Joakim Noah to get 7+ double-doubles in a season.

Johnson led the team in points and rebounds 18 and 11 respectively. He also had three steals. Noah Locke was right behind with 17 points, followed by Scottie Lewis with 11.

The Gators snapped back though to come within five following an 8-0 run. However, Florida was still 0-7 from beyond the arc.

Florida defense kept up a dominant presence and caught up to Georgia to come within three with just under three minutes in the half.

Going into halftime, Florida was able to keep it close but still trailed 30-28.

A layup from Lewis to start the second half tied the game at 30, but the Gators got in another offensive drought, allowing Georgia to go on a 6-0 run.

Continuing his great offensive outing, Lewis scored Florida’s first three of the night to cut down on Georgia’s lead. The threes kept coming and Mann was next to tie the game at 40.

Florida’s first lead of the game came off Lewis free throw at just under 12 minutes to play. They made it a five-point lead following a Nembhard three, just Florida’s second of the night.

The Gator’s patchy offense held true though, and Georgia went on another 6-0 run to regain the 46-45 lead with just under eight minutes to play.

Two back-to-back three’s from Locke put the Gators back up by 4, following free throws from Andrew Nembhard.

Four consecutive turnovers by Georgia and Johnson made it a 10-0 Florida run after a steal on the Georgia inbound and a dunk.

Following a flagrant-1 foul on Johnson, Georgia brings the game within 5, until an answer three from Johnson makes it an eight-point lead again.

A reverse layup from Lewis extends the Gator lead and puts him into double figures and Locke drains his third three of the half to put them up by 12 with just over a minute left to play.

The Florida Gators will return home for their final regular-season matchup of the season against No. 6  Kentucky. Tipoff for Saturday is set for 1 p.m.