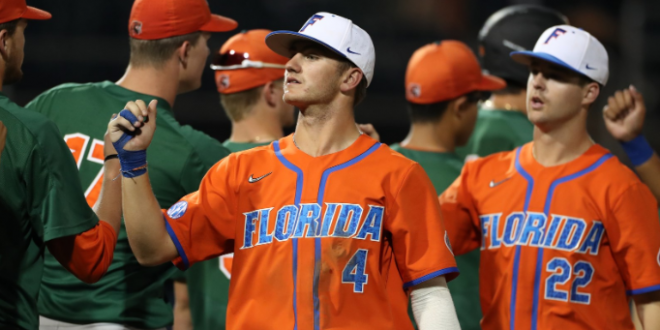 The Florida Gator baseball team got its lucky number 13 win of the season Wednesday night.

UF moved to 13-0 after it cruised past the Florida A&M Rattlers 5-0 in Gainesville. While the Gators are nowhere near Texas’s 34 straight wins to open the 1977 season, they’re just five wins from tying Florida’s longest win streak ever.

Four of UF’s runs came with two down Wednesday.

Florida grabbed the lead early. Jacob Young continued his nuclear stretch with a lead off double in the second and Josh Rivera brought him home with a two-out single.  Another two-out knock, a double by Jordan Butler, in the third scored Jud Fabian for a 2-0 lead.

Florida’s last runs came in the fifth but they came with fireworks. Freshman catcher Nathan Hickey made it 3-0 with a lead off bomb that cleared the right field scoreboard.

With two outs in the frame, Butler added the final two runs when he clanked a 3-2 pitch off the right field foul pole to make it 5-0.

Gator coach Kevin O’Sullivan said his team still has work to do at the plate but had praise for the FAMU starter Kyle Coleman and the Rattlers’ bullpen.

Stop me if you heard this before; the Gator pitching staff had a stellar performance.  Freshman Tyler Nesbitt made his only appearances out of the bullpen so far this year. On Wednesday, he’d lead off the game on the bump.

Funny enough, he didn’t know he was starting until about five minutes before the pregame stretch.

Nesbitt struck out eight and walked one in four innings of one-hit ball. He sat down the first five batters in order and retired eight of nine after three innings.

“I thought Tyler (Nesbitt) set the tone,” O’Sullivan said. “His pace was outstanding for the first four innings.”

Justin Alintoff, Brandon Sproat and Ryan Cabarcas guided Florida through the last five.  Alintoff breezed through the fifth and sixth on just 28 pitches with one hit allowed and two punch outs.

Sproat one-upped Alintoff with a perfect seventh and eighth on 21 pitches. He struck out three batters and hit the gas on his last pitch.

Finally, Cabarcas saw his first action since the series finale against Miami. He racked up two Ks and only used 15 pitches in the ninth.

O’Sullivan on Sproat and the bullpen:

Florida faces the University of South Florida Bulls this weekend in its last out-of-conference weekend series before the SEC schedule starts next week.

O’Sullivan’s squad split the season series with the Bulls in 2019 when now Gator assistant Chuck Jeroloman was on that staff.

Sully on facing the Bulls: