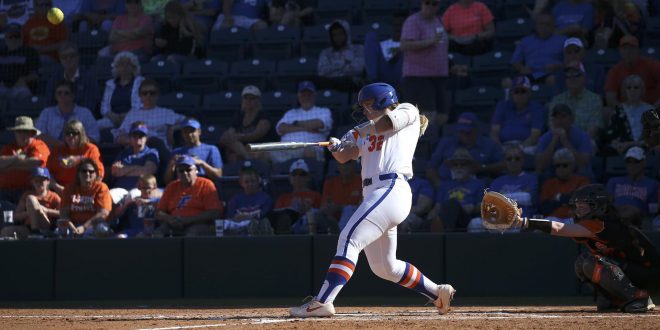 Kendyl Lindaman takes the Aggies deep in the series. She leads the Gators in home runs on the season. Credit: Dakota Williams of floridagators.com.

Like the wheels on the bus, Florida’s batters went round and round. Now, those same bus wheels are pounding I-75 pavement as the Auburn Tigers ride back to Auburn, Alabama, empty-handed after getting swept by the No. 7-ranked Florida softball team.

Wins one and two were nice for the Gators in the opening weekend of SEC play. But game three, shortened by an 11-0 run-rule finish, was the icing on the cake.

In their opening offensive outing, Florida’s lineup opened with three-straight base hits from Hannah Adams, Kendyl Lindaman and Charla Echols. Batting cleanup, freshman Baylee Goddard tacked on another single to push across Adams for the opening score of the contest.

In the bottom of the first inning, the necks of 2,416 Katie Seashole Pressly Stadium attendees consistently snapped as the Gators smacked seven hits in their first at-bat.

Seven of Florida’s nine batters had hits in the bottom of the first inning. Meanwhile, Julia Cottrill and Sophia Reynoso were the only two to not record hits. However, they still reached base on walks.

Florida turned over its lineup once and got to the five-hole hitter in Cottrill before the Tigers finally stopped the first-inning nosebleed.

On Friday, Rylee Trlicek became the first freshman in Florida softball history to record a complete-game shutout in an SEC opener.

On Sunday, she had doubled that up.

Improving to 9-2 on the year, Trlicek hurled all five innings on Sunday. And though she gave up six hits and only managed two strikeouts on the day, the Tigers never found the scoreboard.

When compared to one of her predecessors in Kelly Barnhill, Trlicek’s first SEC series couldn’t have gone better.

Barnhill, who is arguably the best softball pitcher to come out of Gainesville, had no problem approaching Trlicek and telling her about her first SEC outing.

In Barnhill’s SEC opener, she gave up back-to-back-to-back home runs.

After watching the southpawed freshman in her SEC series debut, the height of her ceiling needs to be the next in question.

Prior to the start of the 2020 season, Walton vowed that this year’s Gator team would be more entertaining to watch than those of the past.

Generally known for hard-nosed defense, Florida shifted its focus to the lineup. And according to Walton, that change has a number of dynamics to it.

From the logistics of personnel and scholarship money, down to the nitty-gritty of adding more batting practices to the schedule, all of the moving pieces are working. And they’re spitting out a team average of .323.

On Sunday, the Gators had eight batters eclipse a .500 batting average.

Florida sophomore Cheyenne Lindsey added to her successful weekend from the plate with a 3-3 effort and two RBIs.

On the weekend, Lindsey went 8-11 with five RBIs and a pair of doubles.

And while she highlighted the weekend, collectively the Gators should be one of the offensive highlights around the conference and maybe even country this weekend.

As a lineup, the Gators kept their average above .300 in their series sweep over Auburn — including a whopping .565 average on Sunday.

The Gators (21-4, 3-0 SEC) return to Katie Seashole Pressly on Tuesday afternoon for a midweek match-up against Penn at 2 p.m.

Ainslie is a journalism major at the University of Florida where she specializes in Sports Media. Her main passion is college football as it was a huge part of her childhood. Ainslie serves as a current correspondent for the Ocala Star-Banner, a newspaper for the Ocala, Florida area. She currently covers Marion County high school sports.
Previous Gators Sweep USF; Stays Undefeated
Next 16-0 and more to go for Gator Baseball