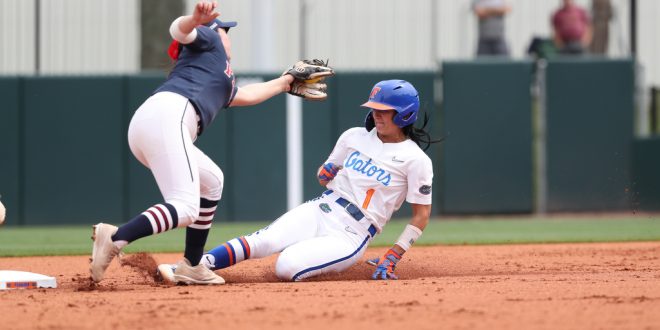 Softball fans are in for a treat tonight at Katie Seashole Pressly Stadium as the Sunshine Showdown comes to Gainesville. This is the first of two games between the Florida Gators and Florida State Seminoles.

Due to all of the excitement surrounding this rivalry game, it’s fair to expect a sizable and energetic crowd. Gators’ head coach Tim Walton anticipates the attitudes of his players to reflect those of the fans.

Gators and ‘Noles coming in hot

Entering tonight’s game, Florida and FSU are both ranked within the top 15. The Gators sit at seven, while the Seminoles lurk behind at 12.

Also, both teams enter with win streaks. FSU ripped off seven in a row, including a victory over Penn. The Gators knocked off Penn last night to extend its streak to five straight wins.

The ‘Noles have a powerful offense, including six hitters batting over .300 and six players with at least three homers. Cassidy Davis drives that power train with five long balls and 22 RBIs. Then, in the circle, Caylan Arnold boasts a 1.14 ERA and four complete games.

As for the Gators, Hannah Adams stepped up in a big way last night. She knocked two balls over the fence: Adams’ first multi-homer game of her career. Elizabeth Hightower and Natalie Lugo each pitched effectively in Florida’s 3-1 win over Penn.

Regardless of ranking, the Noles’ continue to challenge the Gators. In each of the past three seasons, the schools split the two contests played. Last year, FSU shut out Florida in Gainesville, and the Gators returned the favor in Tallahassee. In the previous two years, each school won at home.

Looking back to 2015 and 2016, the Gators swept the ‘Noles. In order to achieve that, Florida must win the first game, which last occurred in 2017. FSU took the first game between the two schools each of the past two years. As many rivalries are, it’s anyone’s game to win.

The Gators and ‘Noles are under the lights tonight at KSP Stadium. First pitch for this Sunshine Showdown is at six.