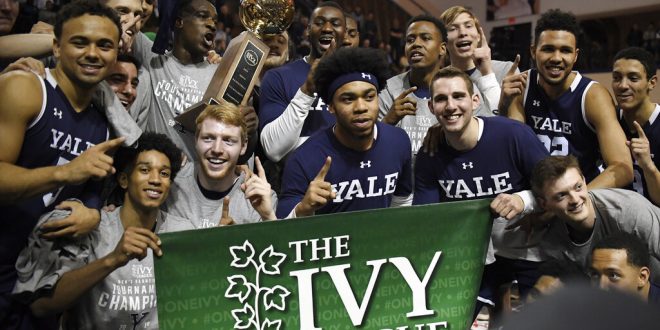 FILE - In this March 17, 2019, file photo, Yale players pose for a photograph with the championship trophy after defeating Harvard in an NCAA college basketball game for the Ivy League championship at Yale University in New Haven, Conn. The Ivy League on Tuesday, March 10, 2020, canceled its men's and women's basketball tournaments because of concerns about the spread of coronavirus. The four-team tournaments were scheduled to be played Friday through Sunday at Lavietes Pavilion in Cambridge. The Ivy League instead will award its automatic NCAA Tournament bids to the regular-season champions, the Princeton women and Yale men. (AP Photo/Jessica Hill, File)

While some conference tournaments are starting over the next few days, some conferences already have claimed their tournament spot. No. 2 Gonzaga is the latest team marching to March Madness. The Bulldogs won the West Coast Conference title in convincing fashion over Saint Mary’s 84-66 Tuesday night. The Ivy League canceled its conference championship due to coronavirus concerns, putting the regular-season champions, Yale, in the tournament. Other teams hope to join Gonzaga and Yale in the field of 68.

Gonzaga securing some revenge a year in the making. Last season, the Bulldogs fell in the title game to Saint Mary’s. One year later, Gonzaga made sure the Gaels to prevent history from repeating itself. However, things were tight in the first half. Gonzaga held a slim one-point lead heading into halftime. In the second half, Gonzaga showed why they deserve to be a No. 1 seed in the NCAA Tournament. The Bulldogs outscored the Gaels 42-25 in the second half to secure the program’s 10th conference title and 17th in program history.

Joel Ayayi and Drew Timme led the team with 17 points each. Ayayi also added seven rebounds. Timme provided a spark off the bench with an efficient shooting performance. He finished shooting 7-8 from the field. Filip Petrusev posted a double-double with 10 points and 14 rebounds.

With this win, Gonzaga has a strong case in securing a No. 1 seed on Selection Sunday.

Sources: The Ivy League has cancelled its conference tournament due to coronavirus.

Regular season champion Yale will go to the NCAA Tournament.

Due to concerns over the coronavirus outbreak, the Ivy League decided to cancel its conference tournament for both men’s and women’s basketball. With this decision, Yale will serve as the conference’s representative in the NCAA Tournament because Yale won the regular-season championship. This decision hasn’t fared well with Ivy League players, who are calling for the conference leaders to reverse on their decision. They have even posted a petition online, hoping to gain support for reinstating the tournament. As of Wednesday afternoon, the petition has gained over 10,000 signatures.

The next conference to name its champion and representative in the NCAA Tournament is the Patriot League. The championship round sees Colgate facing Boston University. The Colgate Raiders have dominated the league this year, holding the top seed with a conference record of 14-4. Overall, the Raiders boast an impressive 25-8 record on the season. This is the third consecutive year Colgate has played in the conference title game. After losing to Bucknell in 2018, the Raiders got revenge in 2019 by securing its first conference title since 1996.