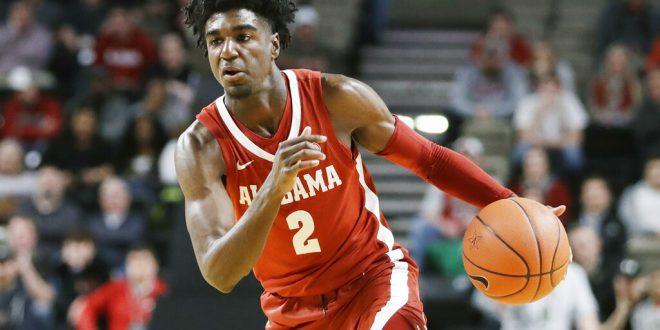 No. 9 seeded Crimson Tide take on No. 8 Vols in SEC hoops tourney

No. 9 seeded Alabama (16-15, 8-10 SEC) faces No. 8 seeded Tennessee (17-14, 9-9 SEC) at 1 p.m. in the second round of the SEC Tournament on Thursday. The winner of the matchup will advance to the quarterfinals to play No. 1 seeded and regular season champion Kentucky on Friday.

The last meeting was a close one

Tennessee beat Alabama 69-68 in their last matchup on Feb. 4. Volunteers junior forward John Fulkerson led the team with 22 points and three rebounds in the game, but he wasn’t the only one who reached double-digit points.

Lewis posted 19 points, four assists and three rebounds against the Volunteers. The 6-foot-3 guard averages 18.5 points per game and 5.2 assists this season.

Lewis is only the second player in Alabama basketball history to reach 1,000 points in two seasons.

Can find these clips of Kira Lewis Jr in most Bama games but doesn’t make them any less impressive: speed, balance, and finish pic.twitter.com/Us9OhwOYMr

Pons, the SEC Defensive Player of the Year, has blocked a shot in every game this season. He leads the SEC with 2.4 blocks per game.

On the other side of the ball, Crimson Tide forward Herbert Jones also made the SEC All-Defensive team. He averages 6.4 rebounds per game, despite playing with a fractured left wrist for all of February.

Jones may play without a cast on Thursday after practicing without it on Wednesday, per Al.com Alabama beat reporter Michael Casagrande. This means Alabama fans may see some two-handed free throws from their lefty guard come Thursday.

Amid the COVID-19 coronavirus outbreak, the NCAA released a statement  Wednesday advising that schools refrain from hosting public events in an effort to slow the spread of the virus and to protect players, employees and fans.

At this time, the SEC Tournament is still open to fans.

The @SEC is aware of the statement just released by the @NCAA. Tonight’s SEC Men’s Basketball Tournament games will continue as regularly scheduled. We are evaluating plans for the remainder of the tournament. More to come.

However, the SEC has taken measures to keep players, coaches, staff and attendees safe during the event. They have posted prevention signs throughout the Bridgestone Arena and sanitized the practice basketballs.

Tennessee just practiced for the SEC tournament and Alabama starts in a few minutes. First, they are switching out racks of balls with sanitized ones. pic.twitter.com/QYs2lJDnV7