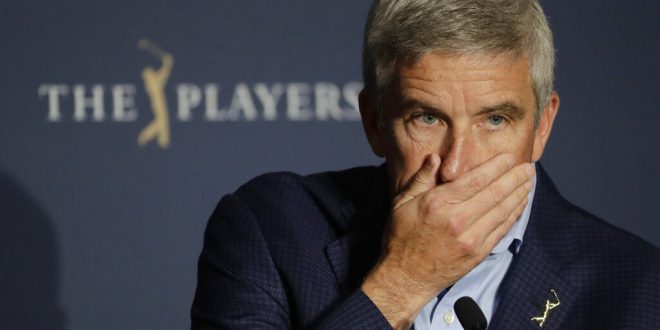 PGA Tour Commissioner Jay Monahan reacts to a question during a news conference at The Players Championship golf tournament, in Ponte Vedra Beach, Fla., early Friday, March 13, 2020. The PGA Tour first said there would be no fans. Now there will be no players. In a late Thursday night decision, the PGA Tour canceled the rest of The Players Championship and said it would not play the next three weeks. (AP Photo/Chris O'Meara)

The coronavirus pandemic has shaken the sports world to an extent that has not been seen since World War II.

The seriousness and the speed of the outbreak have made news come so fast, that this article will probably be out of date by the time it is published.

The Players is known around the golf world as the unofficial fifth major. With a purse of $15 million, it is a tournament that many players circle on their calendar every year. After the Players, the Masters, arguably the PGA Tour’s signature event, was postponed.

Although the PGA tried to hold out, the pandemic eventually made its way to the golf world.

These decisions come in the wake of the unprecedented cancellation or postponement of all major sports, both professional and collegiate.

Matt Kuchar, the 2012 Players Championship winner, gave insight into just how unique of a situation the sports world is in.

Did the PGA wait too long?

The first big domino to fall was the NBA.

Utah Jazz center, Rudy Gobert, tested positive for the coronavirus just minutes before a game against the Oklahoma City Thunder. Once the test came back positive, Adam Silver and the NBA took swift action and suspended all games for the foreseeable future.

In contrast to the NBA’s reaction, PGA Tour commissioner Jay Monahan said the events would proceed the day after the NBA suspended their season.

However, public pressure ultimately won out, and Monahan was almost forced to end match play immediately.

Although Monahan may have faced criticism from members of the media, golfers in the tournament seemed to support his decision.

Players react to the news of the PGA TOUR's season being suspended. pic.twitter.com/jupo5HH3Am

The coronavirus pandemic is forcing organizations and leagues to make decisions on the fly.

So, The answer to “what comes next” is pretty simple. Nobody knows.

The PGA canceled or postponed all events before April 9.

However, the Center for Disease Control recommends that events with more than 50 people be postponed for up to 8 weeks. This puts the sports world back to mid-May.

The course at Augusta National, where the Masters are held annually, is known for having some bizarre rules.

One of those rules is that the course is closed during the summer. This has led to rumors that the tournament could be played during the fall, most likely October.

Maybe the green jacket may have to be orange this year.