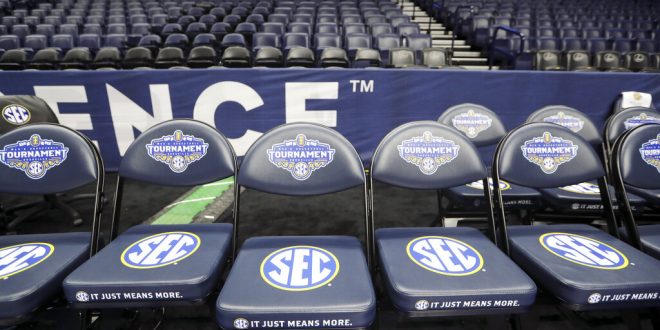 A team sits bench area is empty at Bridgestone Arena after the NCAA college basketball games at the Southeastern Conference men's tournament were cancelled, Thursday, March 12, 2020, in Nashville, Tenn. The tournament was cancelled Thursday due to coronavirus concerns. (AP Photo/Mark Humphrey)

As the Coronavirus pandemic spreads across the nation, sports leagues are taking action in combating the virus. And the virus is taking a toll on football players and fans.

The SEC announced that there will be no spring football games or practices on top of already canceling all regular and post-season competitions.

All regular season conference and non-conference competitions are cancelled for the remainder of the 2019-20 athletic year, per @SEC. https://t.co/B5wuSNTsvY

Furthermore, the NFL is taking precautions canceling all pro days held at schools across the country.

With the growing concerns across the world with the COVID-19, the SEC suspended all practices and team play until at least April 15.

This announcement from the SEC pushed the University of Florida to announce that the 2020 spring game and spring football practices will not be played as scheduled. In addition to these changes, the Florida athletic apartment announced that it is closing all team areas in its athletic facilities until at least April 15 as well, with the exception of its sports health and academic advising units.

Florida was scheduled to begin spring practice this week, and the spring game was supposed to take place on April 18th in the Ben Hill Griffin Stadium.

Athletic director Scott Stricklin says that the spring game is currently “in flux” at the moment because of the unpredictability of the spread of the virus. If there is a drastic change or decline in the spreading of the disease, there remains a chance that spring sports can continue.

The virus also forced the NFL to cancel all its events.

The league sent out a memo saying “After considering recent medical and public safety information related to COVID-19, we have decided to prohibit in-person pre-draft visits involving draft-eligible players effective at the end of this business day, until further notice.”

This news may not affect top prospects who have had plenty of chances to play in major all-star games or go to the combine. Bottom tier players are the ones who suffer in this situation because they will miss another chance to work out in front of scouts.

However, teams will still have the opportunity to conduct interviews with draft prospects over the phone or through video conferences throughout the day prior to the draft. But, teams are limited to no more than three phone calls or video conferences with a single player in a week. Furthermore, their conversations cannot be longer than one hour, and of course, cannot interfere with a player’s school schedule.

There are many unfinished seasons without closure across the globe because of this pandemic. Other sports leagues including the MLB, NBA, MLS and the NHL have also postponed their seasons until further notice.