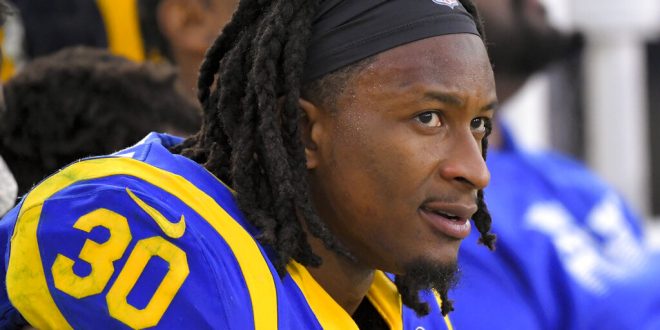 FILE - In this Dec. 29, 2019, file photo, Los Angeles Rams running back Todd Gurley sits on the bench during the second half of an NFL football game against the Arizona Cardinals in Los Angeles. The Atlanta Falcons have agreed to a one-year deal with three-time Pro Bowl running back Todd Gurley, one day after he was cut by the Los Angeles Rams. A person familiar with the deal told The Associated Press about the agreement on Friday, March 20, 2020, on condition of anonymity because the deal will not be official until Gurley passes a physical. (AP Photo/Mark J. Terrill, File)

Like every other sports league, COV-ID 19 has effected the NFL this offseason. The league has had to postpone OTAs, cancel activities outside the upcoming draft, and banned any in-person visits for both free agents and draft prospects.

Already mentioned above some of the offseason changes the NFL has put in place to keep players, coaches, and fans safe during this time of uncertainty. In more detail, the draft will happen on the third week of April as planned. But, the league is still working on if it will stay at its current location, which is less likely or just has ESPN broadcast it from ESPN.

Update on the 2020 NFL Draft pic.twitter.com/zeibQdPgWu

When it comes to free agency, It’s taking a lot longer than normal for players to get officially signed. Teams are having a difficult time with physicals since there are no one-on-one interactions. This has slowed the process down on officially inking players to their new contracts. For example, Tom Brady, who has signed with the Buccaneers, has scheduled an independent doctor physical to get his contract approved. In normal circumstance the team doctor would perform the physical.

There are even reports that some contracts have coronavirus clauses in them to protect the team in case the player fails their physical. ESPN Insider Adam Schefter talks about this very topic

Schefter outlines all the offseason changes and the possibility of future changes as well.

Executive and coached arel getting used to empty facilities and working from home. Facilities all across the league have very few people inside them these days.

Executives are doing all their business from home. That includes contracts, trades, and any other team decision. They have had to adapt to this new way of running their respective organization from their office.

Across the National Football League, players have been on Twitter posting about the coronavirus. Some have been impacted, some are keeping it lighthearted, and all are taking it seriously.

It was reported yesterday that Saints coach Sean Payton tested positive for coronavirus. He is the first person in the NFL to test positive and he is taking it one day at a time.

Appreciate the well wishes. I'm feeling better and fortunate to not have any of the respiratory symptoms. 4 more days at home.#BEATCovid pic.twitter.com/vvjbnqoeZx

Todd Gurley was released by the LA Rams Thursday. His post joked about both his release and the coronavirus quarantine.

Despite some of the jokes, every player is taking the threat seriously like former Panthers and Giants running back Jonathan Stewart.

Prayers up to everyone tonight!

Visit @LAFOODBANK for more on how you can make a difference. Stay safe everyone! pic.twitter.com/vkqsPV07Bb

The entire NFL is taking the changes in stride and is working together to figure out the best option for all those involved including the fans.