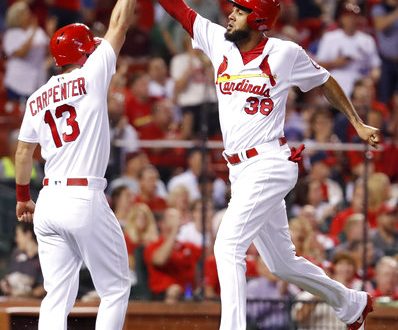 St. Louis Cardinals' Jose Martinez (38) and Matt Carpenter (13) celebrate after scoring on a double by Marcell Ozuna during the first inning of a baseball game against the Pittsburgh Pirates Tuesday, Sept. 11, 2018, in St. Louis. (AP Photo/Jeff Roberson)

Former TCU player and current St. Louis Cardinal Matt Carpenter had one of his career worst batting average in his 2019 season. Carpenter broke TCU’s school record for games played and at bats and was in second for most hits, doubles and walks. After college, he was the Cardinals’ organization Player of the Year in 2010. He was their leadoff hitter and starting third baseman so the pressure was always on.

Bring on the worst season

Cardinal fans would boo him when he would come up to the plate, begging management to trade him. He hit a career low .226, a .334 on-base percentage and a .392 slugging percentage.

But Carpenter isn’t giving up. During the offseason, he looks back on what he needs to improve on and puts in the reps to get out of his funk. He wonders how he went from the best season he’s ever had to the worst.

Batting coach, Jeff Albert has been helping him break down his swing. He even asked Lance Berkman, who he looks up to, to hit in the cage with him weekly and watch his videotape. They spent hours a week together trying to shorten his swing because it grew so long. During offseason, he had his own strength program that would help him try to fix his issues.

Carpenter still had his two-year contract with a $39 million extension.

During his 2018-2019 season, Carpenter hit his career-high homers with 36 and finishing ninth in the MVP balloting. He wants to get back to the past Matt.

.@MattCarp13 defeats .@hunterpence 2-1 after a fielding error by Billy Hamilton. Matt Carpenter finishes the night with a record of 2-2. #STLCards pic.twitter.com/yKPJSaKTgs

Matt Carpenter is aiming for his bounce back year this coming up season and has been chosen to represent the Cardinals  in the MLB The Show 20 players tournament. Without sports during this pandemic, the MLB is trying to do everything they can to keep their fans going. Carpenter is currently in fourth place in the NL Central.