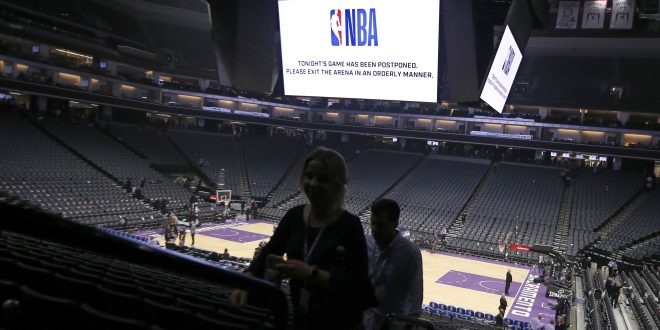 FILE - In this March 11, 2020 photo, fans leave the Golden 1 Center in Sacramento, Calif., after the NBA basketball game between the New Orleans Pelicans and Sacramento Kings was postponed at the last minute over an "abundance of caution" after a player for the Jazz tested positive for the coronavirus. A person with knowledge of the situation says NBA players will be allowed to return to team training facilities starting Friday, May 1 provided that their local governments do not have a stay-at-home order prohibiting such movement. (AP Photo/Rich Pedroncelli, File)

NBA teams and staff are debating on when they should reopen the lavish training facilities to the players to keep them in shape.

Right now, all team facilities are closed. Teams encourage players to work out and stay active but they want that without the presence of in-person trainers or the extensive workout machines and courts.

Monday, the NBA announced they were pushing back their date to reopen training facilities. The NBA aimed for this upcoming Friday, but will now look to reopen on May 8.

The Rush to Reopen

In what was a competitive season that would have come down to one or two games, many players want to get as much practice in as possible. In many ways, this reflects what is happening around the country, as places like Georgia and Florida are looking at ways to reopen their states in a safe way to gradually return to normal life.

However, this motion to return to normalcy this quickly surprised some NBA teams and owners.

ESPN NBA reporter Adrian Wojnarowski breaks down how only a handful of people were aware of this decision before it came down.

Also, the reopening of training facilities was never meant to gradually increase player inflow. Not many expect this to yield practice games and scrimmages. Wojnarowski details that kind of plan has yet to be released.

As sports fans, we all want sports to return. However, the NBA and its owners and players are looking at this from more of a safety issue, even if that goes against training as a team.

Why the NBA is pushing the date back

Safety is obviously the priority during this pandemic. The NBA acted quickly when COVID-19 reached Utah Jazz center Rudy Gobert. However, teams want to see if loosening stay-at-home orders benefits the community and the players who would be coming in to train.

At the moment, it is too early to tell. That is part of the reason why some owners and general managers want to wait to see if any other steps need to be taken.

The primary example of this is Atlanta Hawks general manager Travis Schlenk. Schlenk told Wojnarowski he wants to see how Georgia’s easing of restrictions reflects on the community.

NBA owners received a 16-page memo detailing how teams should go about reopening their practice facilities. This included rules such as only four players allowed in at once, only one staffer supervising, and a minimum of 12 feet between players on a court.

Wojnarowski heard from one owner that if this many precautions must be taken, perhaps it is best just to wait more.

Many of us are caught up in the now, but how might this delay affect the resumption of the NBA next season?

An interesting point brought up by Wojnarowski is that delaying the next season to finish the current one would benefit the NBA. In essence, they want to buy themselves time to fill up arenas.

Right now, fans would be hesitant to meet up with 18-thousand others to watch a basketball game. The decline in ticket sales would hurt the NBA as a whole. Waiting to start next season allows for fans to feel more comfortable to attend games.

The NBA does not know when that season would start. After all, they do not know when the current season will resume and finish. However, they are putting the safety of players, coaches, staff and fans first during this unprecedented pandemic.

Originally from Seminole in the Tampa Bay area, Kyle is a contributor for ESPN Gainesville as well as local NPR and PBS affiliate WUFT. Kyle wants to get into sports with a lofty dream of being a sports broadcaster. He was raised playing soccer and baseball while watching hockey and football, so the knowledge about various sports is fairly extensive.
@KyleFanslerUF
Previous UF Athletic Hall of Fame Welcomes 2020 Class
Next Former Gators’ Assistant Coach Matt McCall’s Journey Through College Hoops