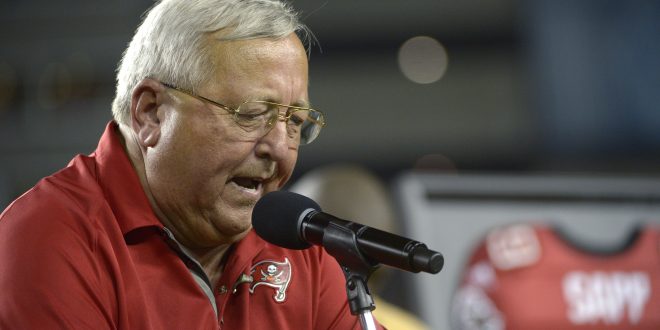 Deckerhoff has been the voice of the Buccaneers since 1989 and the Florida State Seminoles since 1974. He says that so far it has been, “a great run over here in Tallahassee and down there in Tampa.”

Gene’s Time With the Buccaneers

After spending 20 seasons with the New England Patriots, quarterback Tom Brady decided to join the Tampa Bay Buccaneers after signing a two-year contract worth $50 million guaranteed.

“It was shocking. As it is anytime you get one of the greatest of all time, or GOAT is the phrase. He’s attempted almost 10,000 passes, my arm hurts every time I mention that stat,” said Deckerhoff.

In addition, Rob Gronkowski announced that he would be coming out of retirement to join the Buccaneers. Gronk played alongside Brady prior to his retirement in 2019, after a nine-year career during which he won three Super Bowls with New England.

“You get a chance to pull off a deal like this. It’s incredible. And then a week later you find out that his go-to guy, Gronk, wants to come back out and play with his old buddy. I’m excited,” Deckerhoff said.

Deckerhoff is also adapting to changes within his job at Florida State. The Seminoles have recently hired Mike Norvell as their new football head coach. Norvell comes to Tallahassee from the Memphis football program where he led the team to its first American Athletic Conference title. Deckerhoff will be hosting a talk show with Norvell on the last weekend of August.

“I think he is the right guy. He’s 38 years old, he’s the youngest head coach in the Atlantic Coast Conference. He came into the program in December and had to hit the ground running and put together a staff. Begin recruiting. That’s a tough load to haul. Mike Norvell when you look at his record, his offense and defensive numbers are huge, and his special teams were superb. All three levels of what it takes to be successful in the game of football he put together.”

Parker Welch is a Junior at the University of Florida majoring in Sports Media at the College of Journalism & Communications.
@parkerrwelch
Previous Reche Caldwell Killed In Shooting
Next MLB and Players Union Continuing Talks

Although nothing is imminent, College Football Playoff executive director Bill Hancock explained how the criteria …