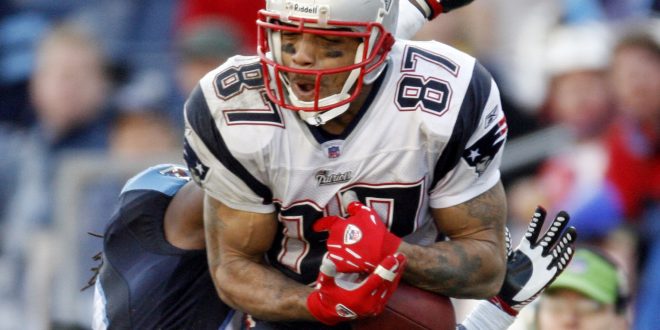 FILE - In this Dec. 31, 2006, file photo, New England Patriots wide receiver Reche Caldwell (87) catches a pass for a 62-yard touchdown ahead of Tennessee Titans cornerback Reynaldo Hill in the third quarter of an NFL football game in Nashville, Tenn. Caldwell, the former University of Florida and NFL receiver, was fatally shot Saturday, June 6, 2020, in his hometown. Caldwell's mother, Deborah, did not return phone messages left by The Associated Press on Sunday, but confirmed her son's death to the Tampa Bay Times. (AP Photo/John Russell, File)

According to the Tampa Police Department it did not appear to be a random act. The investigation was being pursued as a homicide.

Caldwell played for Florida under coach Steve Spurrier from 1998 to 2001. During his college career, Caldwell was selected third-team All-American by The National Sports Bureau, an honorable mention All-American selection by the Football News, a semi-finalist for the Fred Biletnikoff Award, and a second-team All-Southeastern Conference selection. In 2000, Caldwell’s talents helped earn the Florida Gators an SEC championship title.

Following the news of Caldwell’s death, Spurrier tweeted Reche Caldwell was of the best wide receivers to ever play for the Gators.

We are all saddened by the death of Reche Caldwell. He was one of the best WR’s in school history and was very instrumental in winning the 2000 SEC Championship. We will always remember him and RIP Reche! -Coach S.S.

In 2002, the San Diego Chargers drafted Caldwell in the second round of the NFL Draft. After playing with the Chargers for four seasons, he signed with the New England Patriots in 2006. Then, Caldwell signed a one-year contract with the Washington Redskins in September 2007. At the conclusion of his Redskins contract, he finally signed with the St. Louis Rams. However, the Rams cut him during the preseason.

Within his professional career, Caldwell appeared in 71 games, catching 152 passes for 1,851 yards with 11 touchdowns. According to a statement by Patriots head coach Bill Belichick, Caldwell will be remembered for his dedication and contributions to the game.  The Chargers also released a statement about Caldwell’s passing.

We are deeply saddened by the tragic loss of former Charger Reche Caldwell.

Our thoughts and prayers go out to Reche’s family, friends and teammates during this difficult time. pic.twitter.com/vsoj0zeeWP

Parker Welch is a Senior at the University of Florida majoring in Sports Media at the College of Journalism & Communications.
@parkerrwelch
Previous Will there be baseball this year?
Next Long Time Bucs Play by Play Man Gene Deckerhoff Talks Tom Brady