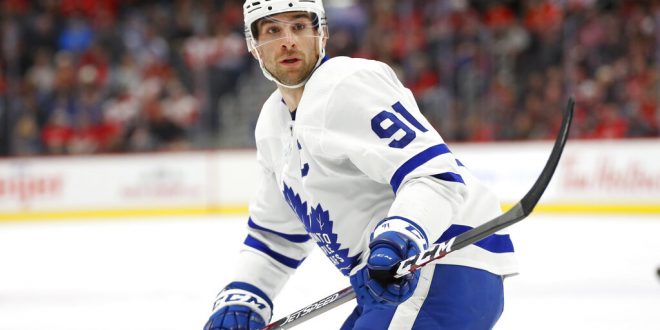 FILE - In this Nov. 27, 2019, file photo, Toronto Maple Leafs center John Tavares skates during the team's NHL hockey game against the Detroit Red Wings in Detroit. Tavares took his sticks home from the rink in Toronto to tape them up so he wouldn’t waste his limited time there. NHL players could start participating in voluntary small-group workouts, and teams began opening their training facilities Monday, June 8. Players learned Thursday training camps can open July 10, pending an agreement on returning to play later this summer, and they're now expected to trickle back in preparation of the resumption of the season. (AP Photo/Paul Sancya, File)

He appeared in SportsCenter’s Return to Sports special, which aired Monday on ESPN. Mike Greenberg interviewed Bettman and five other professional sports commissioners. Bettman covered the new playoff format and safety measures that the NHL will take.

Looking ahead to NHL Playoffs

The new-look playoffs for the remainder of the 2020 season include 24 teams. First, there is a qualifying round to determine which teams will advance to the traditional 16-team playoff. Bettman explained the league’s reasoning to include this play-in round.

In each conference, the top four teams automatically receive byes. The remaining teams will compete in eight best-of-five series in order to advance to the second round.

Then, the final 16 teams will battle it out in four rounds of best-of-seven series. Afterwards, the Stanley Cup Champion will receive its crown.

Recently, the NHL announced that players should report to training camp on July 10. Since training camp will likely last for three weeks, the qualifying round could begin as soon as the last week in July. However, an early-August return might be more realistic.

In terms of location of postseason games, Las Vegas is all but confirmed as a hub city when play resumes. By comparison, the second hub city is much less clear.

Toronto, Edmonton and Vancouver are all possibilities because the NHL reportedly desires a Canadian city. Los Angeles and Chicago also arose in conversations about the second hub city.

On June 8, several teams began to reopen facilities. Since then, only two positive COVID-19 tests have come back. It is important for the league to closely monitor the health of its players and other members.

“We’re going to be focused jointly with the players association,” Bettman said. “Everything we’ve been doing has been a joint effort, working together, to make sure that we’re adhering to the protocols which will be very strict.”

In order for the rest of the season to go smoothly, the NHL plans on rigorous testing procedures. Each day, the league will test all players, coaches and other members of each team.

“If there’s one positive test — again, this will be under the strict guidance of the medical people — that person will be isolated,” Bettman said. “And we’ll be monitoring anybody, through contract tracing, that was in close proximity. Obviously, for any sport, if you have a major outbreak, it’s going to change everything; but we’re being told that an isolated case or a couple of isolated cases shouldn’t interfere with the plans, and we should be able to move forward.”