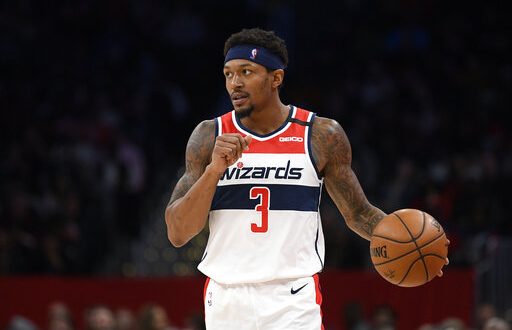 Washington Wizards guard Bradley Beal (3) dribbles the ball during the second half of an NBA basketball game against the Miami Heat, Sunday, March 8, 2020, in Washington. The Heat won 100-89. (AP Photo/Nick Wass)

Bradley Beal has added more to his Florida legacy after a significant donation to the University of Florida Boosters Club. His donation will put his name in the Gator basketball’s practice facility.

The “Bradley Beal Fuel Bar” will be located in the basketball practice facility weight room. It will make it’s debut soon in the 2020-2021 athletic season.

Beal’s donation was part of a legacy he always wanted to leave in Florida. As one of two “one-and-done” Florida athletes, Beal regrets not coming back for a second season.

Whenever Beal is asked what would have happened if he returned for a second season, he confidently answers “We would have won the National Championship.”

Despite already having a historic run with the Gators, Bradley felt he could do more — hence the donation.

With this donation, the Gators now have current NBA, NFL, and MLB players with their names on athletic facilities. These include Indianapolis tight end Trey Burton, and Atlanta pitcher Darren O’Day.

UF Athletic Director Scott Stricklin recognized Beal as someone they can count on to support their basketball program.

“We’re incredibly grateful for his willingness to also support our basketball programs financially with this enhancement to their practice facility, and are proud of the examples set by former student athletes who give back to the program.” said Stricklin

This donation is just the beginning of Beal’s plans. The two-time All-Star said that, in time, he intends to do more.

Beal entered Florida’s basketball roster for the 2011-2012 season. He committed to the Gators as a five-star prospect and the 2011 Gatorade National Player of the Year.

During his recruiting, former Florida football coach Urban Meyer pitched the idea of Beal playing both football and basketball. Meyer had this idea after spending time with Beal watching football film.

“It was crazy. He could tell how much I loved football and understood I was engaged in that life.” said Beal.

Beal led his team in scoring as a freshman and embraced a leadership position towards the end of the season.

After that constant encouragement, Beal accepted the challenge of getting out of his comfort zone. Despite being the youngest player, he was able to become a leader to the team.

Beal described the difficulties faced when trying to accomplish this. He said that it can be hard to find a voice as a young player in a team full of upperclassmen. But Beal said that there was no hierarchy under Donovan’s coaching.

“He put a lot of responsibility on me. It became a year of a lot of adversity because I realized I wasn’t perfect. In high school, I was the best player everywhere I went, but this was a big adjustment. It made me grow as a man.” said Beal

The team reached the Elite Eight but were four points short against Louisville to go on to the Final Four.

At the end of his freshman season, Beal had doubts about whether or not he should return to college or enter the draft. After considering all options, coach Donovan told him that the deal he would receive would be too good to turn down.

Beal was drafted by the Wizards as a third pick on the second round of the 2012 draft.

Recently, Beal has been leaving his mark on the franchise. He is now a two-time All-Star shooting guard (2018, 2019) and led the league in minutes played with an average of 36.9 minutes per game.

Before the coronavirus outbreak shut down all sports, Beal ranked second in the league in scoring at 30.5 points per game.

He recently signed a $72 million contract extension until 2023. If he resigns in 2023, he will be eligible for a record-setting five-year, $266 million deal for his 10 years of loyalty.

Camila is a senior at the University of Florida studying Telecommunications with a specialization in production and a minor in Innovation. She is also seeking a Sports Management certificate. Camila is also WUFT's news director as well as a sports reporter/anchor.
@CamilaMaffuz
Previous Lakers’ Avery Bradley rejects NBA relaunch amid family concerns
Next MLS Clubs Arrive to Orlando for Return