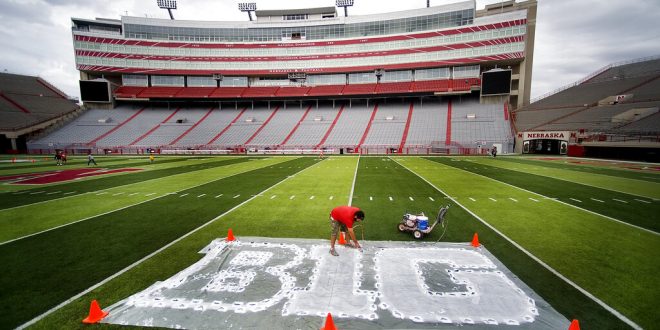 FILE - In this Thursday, Oct. 6, 2011 file photo, Turf manager Jared Hertzel touches up the newly-painted Big Ten conference logo on the football field at Memorial Stadium in Lincoln, Neb. The Big Ten Conference announced Thursday, July 9, 2020 it will not play nonconference games in football or several other sports this fall because of the coronavirus pandemic. (Jacob Hannah/Lincoln Journal Star via AP)

The Big Ten Conference announced that it will be playing conference-only schedule this fall. Like the Ivy League’s decision, this impacts football too.

This was the first Power 5 Conference to make this move. However, the ACC has already announced that it will delay the start of fall sports until at least Sept 1.  Experts expect the Pac-12 to switch to conference-only as well in the next few days.

Many expected dominoes to start falling once the Ivy League made their decision. But it’s hard to imagine that decisions would have come this quickly. Analysts thought they would be made in the coming weeks. It took a couple of days.

Some highly-anticipated matchups got the ax because of this decision. Ohio State’s scheduled game against Oregon? Gone. Wisconsin’s matchup against Notre Dame at Lambeau Field? Nope. Not Happening now.

That leaves independent teams. What do they do? Good question. Notre, at least, has a fallback plan, where they can play ACC schools. ESPN’s Senior Writer Heather Dinich said that Notre Dame will likely use the fallback plan.

That still leaves other independents schools like BYU, New Mexico State and UMass. Florida is supposed to play New Mexico State in week 12 (game 11) of the season. If the SEC votes to go in the direction of the Big Ten, Florida scratches that games and perhaps pencils in Alabama instead. Maybe the independent teams will have to just play each other. That would cover at least six opponents if Notre Dame plays them.

Keep in mind, before the shutdown, sports attempted to keep doing with cautionary moves. The NHL and NBA opted to play certain games without fans, thinking it could allow for the league to keep going. But seasons still shutdown.

Football and other fall sports could be moved to the spring. But that would be a last resort, and the situation would have to drastically improve if it reaches that point. If there is college football this season, this is what it is going to look like. If there isn’t, Florida will face FAU to start the following season on Sept. 4, 2021.

Harrison is a sports coordinator at ESPN 98.1 FM/850 AM WRUF. He served as a beat writer for Florida Gators football for the 2019 and 2020 seasons. He also contributes to WRUF's Gainesville Sports Center segments and makes appearances on the Clash on Harp on Sports. Harrison has been a content writer for WRUF since January 2019 as well.
@HarrisonSmaj
Previous Oliver Crawford turns pro
Next Austin Peay Hires P.K. Yongue Alum As Head Football Coach