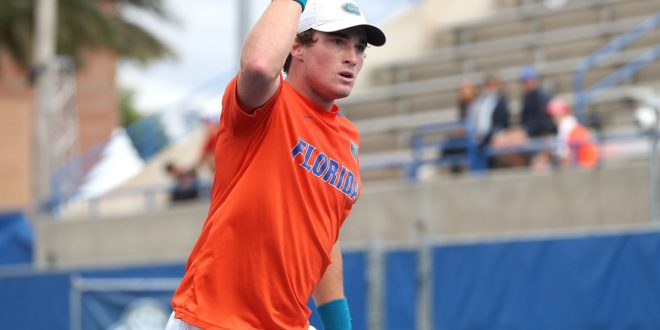 Captain Oliver Crawford celebrates with a fist pump as he closes out his singles match against Alabama in the SEC Tournament. This was his second singles match win of the tournament giving him a spot on the SEC All-Tournament team.

After three years, Oliver Crawford has decided to go pro. The young athlete caught up with Steve Russell on Sportscene to discuss his big decision.

The 5’10 ace has had an impressive career at Florida. He is 63-22 in overall singles, as well as 23-5 in the SEC. He has been named twice to the First Team All-SEC and a three-time ITA All-America.

When he wasn’t competing in a single’s match, the SEC-star would be playing in a double alongside childhood friend Sam Riffice.

He also was the SEC Freshmen of the Year. His choice to leave Gainesville was not easy. Over his Gator career, Crawford developed numerous relationships with other athletes, coaches, and students.

“The Gator nation is truly a family,” – Oliver

The 2018 Gator MVP reflected on his years playing under Coach Shelton. His entire experience can be summed up into one word–“Incredible.” Shelton was the main reason why Crawford chose to don the orange and blue.

It’s pretty unheard of for many tennis players to leave university quickly, but this South Carolina native feels ready for the challenge.

Crawford, like many others, saw their season cut short. He was scheduled to face-off against long-time rivals, the Georgia Bulldogs before the season was canceled.

Sports still seem to be in question today. Tennis is no exception. While the former Gator was going to enter into tournaments since turning pro, COVID-19 has prevented that. To stay busy, he has been training all through quarantine and is eager to get back on the court. But looking back at all this time at Florida, the people are what he will miss and remember the most.