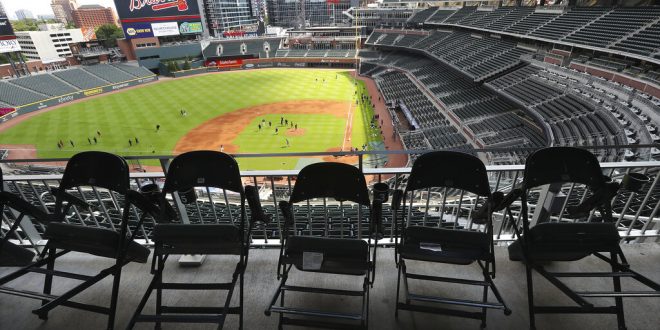 Throughout his career, Jones hit .303 with 468 home runs and earned the Most Valuable Player Award in 1999. Also, he helped lead the Braves to 14-straight division titles and a World Series Championship in 1995.

Because of his prestigious career, Jones was inducted into the National Baseball Hall of Fame in 2018 after earning 97.8 percent of the vote. Soon, his impact on the game will go beyond the field of play.

Starting this upcoming season, Jones will join the ESPN broadcast booth as a baseball analyst. He turned in a pair of solid performances as a guest analyst for the network. It earned him a full-time gig.

His debut as a regular-season analyst features a fitting matchup. On July 24, the Braves visit Citi Field to take on the New York Mets.

Additionally, Jones will work ESPN’s first “Sunday Night Baseball” broadcast of the season, which is the third game of the Braves-Mets series. Later in the season, he will call weeknight games and holiday games.

With only 60 games, his first regular season in broadcasting is an unprecedented one.

Since the regular season is so brief, teams must avoid long losing streaks. As a result, Jones believes that starting pitchers will be on a short leash.

“With them carrying 15, 16, maybe even 17 pitchers on their 30-man roster, if you don’t have it in the first or second inning, that hook is going to be quick,” Jones said. “That manager is going to be trying to use every resource in that bullpen available to try and pull out a win.”

Also, a short season yields the possibility of a player maintaining a .400 batting average. However, only one player since 2000 has managed that over the first 60 games of a season: Chipper Jones. Unfortunately, Jones thinks that hitters will struggle to heat up after a prolonged break.

There are lasting concerns about player safety due to the coronavirus pandemic. Jones worries about the procedure for when a player tests positive while on the road.

“You just hope it’s not one of the really key players for one of these contending teams,” Jones said. “Sixty games is a sprint. It’s not a marathon anymore.”