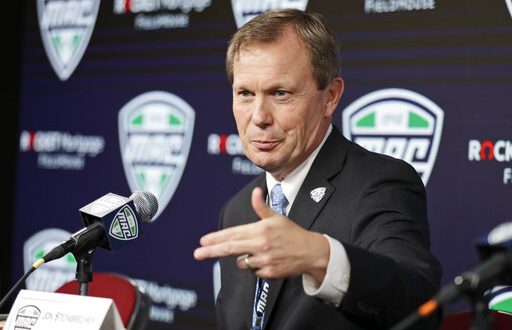 FILE - In this March 12, 2020, file photo, Mid-American Conference commissioner Jon Steinbrecher speaks to the media in Cleveland. The Mid-American Conference on Saturday, Aug. 8, 2020, became the first league competing at college football’s highest level to cancel its fall season because of COVID-19 concerns. With the MAC’s 12 schools facing a significant financial burden by trying to maintain costly coronavirus protocols, the conference’s university presidents made the decision to explore a spring season. (AP Photo/Tony Dejak, File)

The MAC, or Mid-American Conference, canceled fall sports on Saturday. Also, the conference may move all fall sports to spring 2021 for the time being.

Can confirm the Stadium report that the MAC has cancelled football this fall. MAC presidents had a call at 9 a.m. this morning, and the finances didn't make sense anymore. The league had just 5 buy games with Power 5 schools remaining. Look for the spring option to be explored.

Why did it come to this?

The big thing MAC commissioner Jon Steinbrecher wanted to stress in his media availability was player safety. He did not think the conference could keep the student-athletes safe during this time, so he said he took the conservative approach.

Steinbrecher went on to talk about how the decision was made and who the conference talked to for guidance.

Could spring football happen in the MAC?

The reports say the conference is looking to create a spring football season. Steinbrecher confirmed those reports by saying is it the conference that will give the fall semester sports a chance to play in spring 2021.

Also, there are reports that ESPN is looking to televise the spring college football season.

What does this mean for the Power 5?

The Mid-American Conference canceling fall sports is a huge blow to the Power 5 conferences.

The BIG 12, a conference with ten teams, could have used the Mid American conference to help complete their schedules.

The SEC announced the two extra opponents for each team’s schedule. However, that may not even matter now, because the Power 5 conferences are having meetings all week to discuss the likelihood of a season.

Breaking news story with @RossDellenger: Nationwide conference meetings this week are expected to result in the postponement of the 2020 college football season and all fall sports.

If the news is as bad as reports say, the rest of the Power 5 will be in the same position as the MAC. It should be interesting to see what the conferences do.

Will they move together, or will one take the lead?

Also, will the conferences all go to a spring football schedule?

Finally, how will the conferences be affected by not having fall sports?

The answers will come sometime this week hopefully.