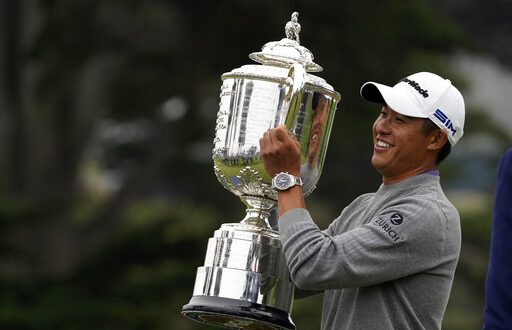 Collin Morikawa, a 23-year-old golfer from California, won his first major in his second try at the PGA Championship in San Francisco. Morikawa finished at -13, while Paul Casey and Dustin Johnson tied for second at -11. There was also a five-way tie for fourth.

Collin breaking records on the weekend

Morikawa was six shots off the lead going into the weekend. From there, he went on to set a record for the lowest weekend score for a major winner.

Also, Morikawa was first in proximity to the greens, first in driving accuracy, first in putting and first in strokes gained.

The final round on Sunday saw a seven-way tie for the lead at one point on the leaderboard. However, Collin Morikawa was able to separate himself from the pack with three clutch shots.

First, Morikawa chipped-in for birdie on hole 10 to give him the outright lead.

Pitch perfect … for the LEAD.

Then, on hole 16, Morikawa hit a mammoth tee shot that hit the green on the par 4.

Finally, Morikawa sank that eagle putt on 16 to give him a two-shot lead, and he never looked back.

Following the victory, Morikawa was surprised to find out the PGA Championship’s trophy had a lid that came off. The Wanamaker Trophy was immediately put back together, and Morikawa was able to resume his photo-op with the trophy.

Morikawa now joins Tiger Woods, Jack Nicklaus and Rory McIlroy as the only players to win a PGA Championship at the age of 23.

Up next for the PGA Tour

Next week, the PGA Tour heads to Greensboro, North Carolina for the Wyndham Championship.

Then, after two more tournaments, the Tour Championship will take place in Atlanta on Sept. 4-7.

The next major on the schedule will be the U.S. Open in Mamaroneck, New York on Sept. 17-20.