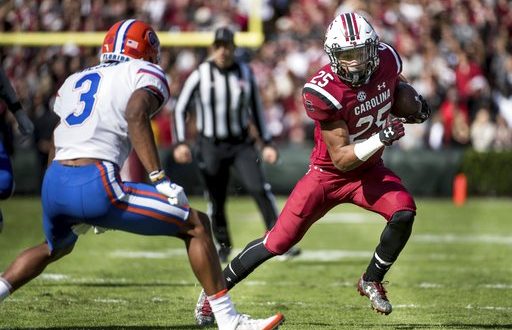 Gator fans celebrated after star defensive back Marco Wilson announced he was returning for the 2020 season. The versatile DB has his eyes on the prize as he prepares for his presumable last college season before entering the 2021 NFL Draft.

But Wilson is not only focused on boosting his stats and getting more film. He also wants to leave his mark by leading the younger Gators athletes.

Many football greats were once part of the Florida roster. Some of them serve as Wilson’s inspiration to perform at the highest level.

He hopes to one day be part of that list of Gator greats that younger Florida athletes can look up to.

Wilson is using his experience to guide incoming freshmen such as Jahari Rogers, Avery Helm, and Tre’Vez Johnson.

“They came here ready to compete. We see that they can compete at the college level,” said Wilson. “It’s just cool for me to coach them up and help them with the plays, anything they need.”

Another young athlete that shares the same position as Wilson is Kamar Wilcoxson.

During his freshman year, Wilson acquired plenty of experience almost right away, as he started in all 11 games at cornerback.

Although Gator head coach Dan Mullen is not sure Wilcoxson is ready to do the same, Wilson believes that he already has a head start by starting at such a young age.

The Florida native says he talked with Wilcoxson and expressed his availability to help him in anything he needs.

Gators defensive coordinator Todd Grantham described Wilson as “the most versatile player he has coached”.

Wilson usually plays at cornerback but last season he was seen at the start position. The change in position is not something that fazed him, as he welcomes the opportunity to play multiple positions.

The redshirt junior is willing to make these position changes and play “wherever his team needs him.”

Grantham and Gators fans might be impressed with Wilson’s abilities, but it seems that not everyone is in agreement.

Wilson was left out of the Jim Thorpe Award watch list, an award given annually to college football’s top defensive back.

Despite what he expressed on his twitter, Wilson said he is focused on more important things:

“At the end of the day I’m not here for rewards,  I’m here to play with my team and win games… It doesn’t matter to me I’m just trying to level up my game and get to the next level.”

Gator athletes and coaching staff joined a peaceful social justice protest this weekend. Football players and coach Mullen were spotted in it.

Mullen has been open about his coaching team having conversations with the players about recent events.

Wilson expressed that all he and his team hope for is for support. He also stressed how important it is for people to educate themselves.

Wilson said that he expects support from fans both on and off the field. He emphasizes that he and his teammates are “not just entertainment.”

Camila is a senior at the University of Florida, who served as a beat writer for the women's basketball team from 2019 until the 2021 season. She was also a beat writer for the Gators football team during the 2020 season. Camila is also WUFT's news director as well as a sports reporter/anchor.
@CamilaMaffuz
Previous MLB trade deadline: Clevinger to Padres dominates headlines
Next Todd Grantham talks player progression and improvements