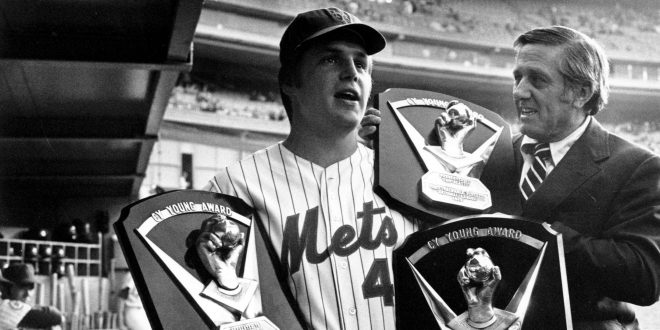 Share
Hall of Fame pitcher, Tom Seaver passed away at the age of 75. One of the world’s most right-handed dominate pitcher of his time. Seaver played for four different professional teams during his MLB career. Played professional baseball for 20 years,  drafted in 1967 and retired 1986.

Arguably the best Met of all time, Tom Seaver, died on Monday at the age of 75.

Sources from the Hall committee say Seaver passed away from complications of Lewy body dementia and COVID-19.

ESPN Sports Analyst Tim Kurkjian says there will never be another Tom Seaver.

Tom Terrific, a nickname that Seaver earned during his National career, was a well-known pitcher throughout the MLB for striking out his opponents and leading the league in strikeouts several times throughout his career.

During his professional career, he won 311 major league games for four different major league teams. However, his most notable team he played for was the New York Mets.

He was simply the best to ever put on a #Mets jersey. #RIP41 pic.twitter.com/eqb8dBo15Y

Drafted in 1967 to the New York Mets, Seaver went into his rookie year with a plan to turn the Mets organization around which they were coming off a losing season.

Before Seaver was drafted to the Mets, the New York team was only a five-year-old franchise that never finished higher than ninth in a 10 team National League. Sever won the “Miracle Mets ” their first National League Championship and World Series in 1969.

Furthermore, he went on to win three more titles for the franchise, gaining another nickname the “Franchise Kid”.

He was the leagues rookie of the year in 1967 and was an All-Star nine times in 10 full seasons. During Seaver’s 20-year career he managed to have 3,640 strikeouts and 61 shutouts games during his remarkable career. Landing him on the list of the sixth all-time leader in major league history.