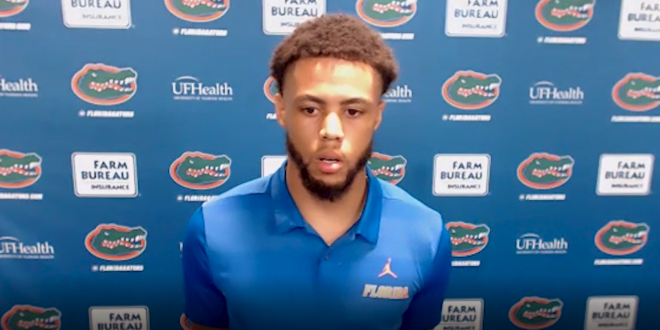 Stiner gained six to seven pounds in the offseason and felt that it was easier to do so as an older player during the pandemic.  Despite the uncertainty of the world, his routine and communication with the coaching staff stayed consistent.

Stiner and the older safeties have also embraced the leadership role in Jeawon Taylor’s absence.

“All of us, the older guys, we are all the same experience wise,” Stiner said. “I feel like we are all leaders in our own way.”

When asked about Trey Dean’s progress, Stiner said he is constantly asking questions and trying to learn as much as possible.

“Trey is a real competitor,” he said. “He’s doing a good job of being versatile.”

Stiner also mentioned “little Henderson” as the player who is standing out the most on the offensive end.

The former 5-star prospect announced his eligibility via his Instagram stating; “Finally got the waiver… go time.”

Many fans were speculating the fate of his eligibility for the season as Miami transfer Lorenzo Lingard found out in May that his waiver was granted.

Shorter is the highest-rated prospect on the Gators’ roster since they signed five-star recruits CeCe Jefferson and Martez Ivey back in 2015.