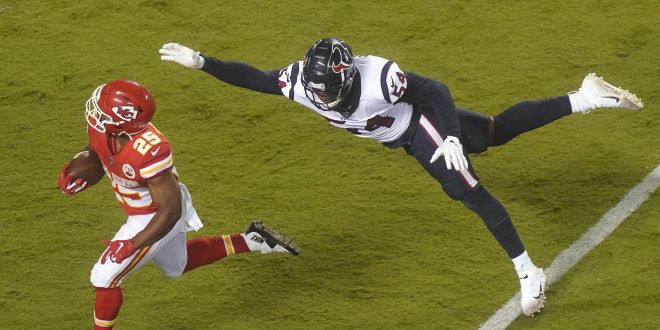 Kansas City Chiefs running back Clyde Edwards-Helaire (25) scores a touchdown on a 27-yard run ahead of Houston Texans linebacker Jacob Martin (54) in the second half of an NFL football game Thursday, Sept. 10, 2020, in Kansas City, Mo. (AP Photo/Charlie Riedel)

The NFL season opened up last night as Patrick Mahomes and his Kansas City Chiefs grabbed a 34-20 victory over the Houston Texans. KC quarterback Patrick Mahomes threw for 211 yards and contributed three touchdowns.

Opened the season with a WIN! #Kickoff2020 | #ChiefsKingdom pic.twitter.com/nUAfETsjMS

The Chiefs also showed off their new running-back Clyde Edwards-Helaire. He made his NFL debut by grabbing 138 yards and a touchdown against the Texans. Although the Texans took an early lead in the first quarter at 7-0, the Chiefs were able to respond with aggressive offense and scored 31 points before the Texans made their final addition to the score in the final period.

To contrast, Houston quarterback Deshaun Watson threw for 253 yards and one touchdown. The Texans off-season was shaken by the trading of their star wide receiver DeAndre Hopkins but in this game running back David Johnson was solid, running for 77 yards on 11 carries with a touchdown.   He added three pass receptions for 32 receiving yards.

The Chiefs and the Texans both displayed a show of unity during the National Anthem in order to acknowledge inequality. The Texans chose to stay in the locker room during the anthem and then transitioned to the field to link arms with Chiefs’ players. Houston Texans quarterback Deshaun Watson explained how he spoke on the idea with Mahomes prior to the game.

“We decided as a whole to just stay inside and then come out and do the moment of silence together,” said Watson.

Houston Texans head coach Bill O’Brien explained that the players simply wanted to be very respectful of each other and their opinions.

Arrowhead Stadium was filled with 15,000 mask-covered football fans who were overall not welcoming of the players’ actions of unity. Patrick Mahomes said that on the field, he did not focus on the booing but the feelings of unity instead.

Kansas City will travel to the Los Angeles Chargers next Sunday while Houston will host the Baltimore Ravens.

Parker Welch is a Junior at the University of Florida majoring in Sports Media at the College of Journalism & Communications.
@parkerrwelch
Previous Kentucky Football Preview
Next Stiner Talks Defense, Shorter gets Waiver 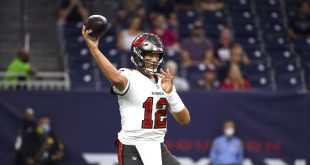