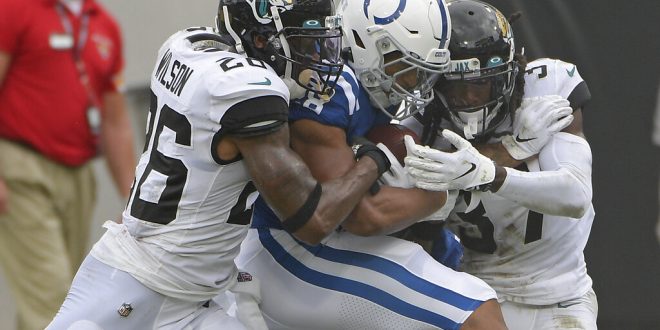 The Jacksonville Jaguars secured a 27-20 victory in their season opener against the Indianapolis Colts on Sunday afternoon.

Despite a shaky start, the Jaguars rookies kept up with an experienced Philip Rivers and Colts offense.

The first half of Sunday’s game showcased the fresh faces on the Jacksonville roster this season.

With former stars Calais Campbell and Leonard Fournette gone, the Jaguars were looking for new offensive and defensive leaders.

On the opening drive, Colt’s quarterback Philip Rivers looked comfortable in his first game with his new offense. The Jaguars’ defense struggled to contain Rivers and the Colts run game.

Indianapolis running back Nyheim Hines completed the drive with a 12-yard rush to put the Colts up 7-0 in the first five minutes of the game.

The Jacksonville offense took over with little success in the first quarter. Rookie running back James Robinson gave the offense a glimpse of speed in the Jaguars opening drive.

The Jacksonville offense started off with back to back punts before finding some offensive momentum.

Jacksonville quarterback Gardner Minshew II fired up the offense with a six-yard pass to D.J. Chark to tie the game, 7-7.

Indianapolis quickly responded with a scoring drive of their own to regain the lead 14-7. Rivers found Hines in the end zone for his second touchdown of the game.

Rivers finished the first half with 227 yards and a touchdown for the Colts.

Minshew II and the Jags found an offensive rhythm in the second quarter.

On the following drive, Minshew II threw his second touchdown of the game to rookie Laviska Shenault Jr. to tie things up at 14-14.

Rookie kicker Rodrigo Blankenship knocked in a 38-yard field goal to put the Colts up 17-14 before the half.

Jacksonville kicker Josh Lambo opened up the second half with a 50-yard field goal to tie the game.

Tied 17-17 at the start of the fourth, the Colts struck first. After a series of penalties that overturned a Jacksonville interception, the Colts capitalized.

The Jaguars offense shifted the momentum midway through the fourth quarter. A 22 -yard pass from Minshew II to Keelan Cole gave the Jags a 24-20 lead.

Minshew II finished the day 19-20 for 173 yards and three touchdowns.

The Jags’ defense secured the lead with an interception from Andrew Wingard. A 46-yard field goal from Lambo put the Jaguars up 27-20.

The Jaguars hit the road for their first away game of the season against the Tennessee Titans.

Minshew II and the Jaguars kickoff against the Titans at 1 p.m. on Sept. 20.