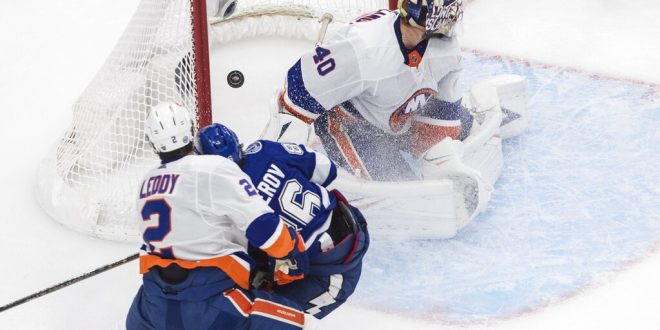 Lightning Lose in Double Overtime to the Islanders in Game Five

The Islanders broke the Tampa Bay Lightning’s overtime win streak last night, 2-1. The Lightning won the last five games that they have gone into overtime until they faced the Islanders in game five.

The Islanders were the first to score last night after a tripping call against Nikita Kucherov resulted in a penalty for the Lightning. At 15:41, Ryan Pulock got the puck past Andrei Vasilevskiy making it 1-0 in favor of the Islanders.

The rest of the period remained scoreless for both teams. Four minutes into the second period, though, the Lightning answered back with an even-strength goal from Victor Hedman putting the score at 1-1.

With less than two minutes left in the third period, a penalty on the Islanders led to a four-minute power play for the Lightning. Anthony Beauvillier was charged with high sticking after Mikhail Sergachev was bloodied from taking Beauvillier’s stick to the mouth. Nothing came out of the power play, however, and the score stayed 1-1 until the end of regulation time.

The first period of overtime saw no goals and no power plays for either team. At 12:30 in the second period of overtime, Jordan Eberle found the back of the Lightning’s net, ending the game. Eberle’s goal resulted as a giveaway in the defensive zone by Kevin Shattenkirk to Anders Lee.

Tampa Bay went into game five leading the series 3-1, only needing last night’s win to secure the Eastern Conference title. This could have been the last game of the Islanders’ season, and coach Barry Trotz knew this going into the game.

Game one started as a win for the Lightning, defeating the Islander’s 8-2. The second game also went to the Lightning 2-1. Game three was a turning point, however, when the Islanders answered back with a 5-3 win going into the weekend. In Sunday night’s game, the Lightning took home the glory with a 4-1 defeat that brought them into a strong position for game five.

Tomorrow, Sept. 17, the series continues for game six, and if necessary, game seven on Saturday. The winner of the series will move on to compete against the Dallas Stars in the Stanley Cup Finals.

Rylee is a second year Journalism major with a specialization in Sports and Media at the University of Florida College of Journalism and Communications.
Previous Florida Putting a Pause on Gator Baseball and Lacrosse
Next LSU battling before season begins