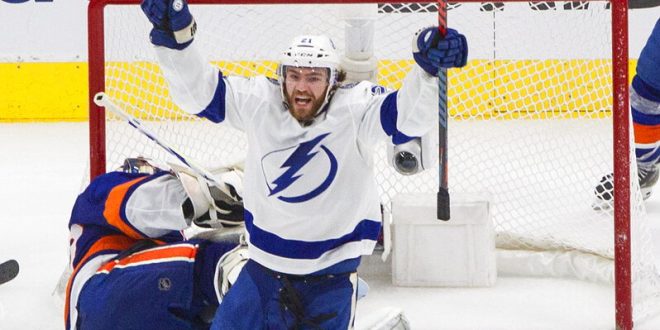 The Tampa Bay Lightning look to lock in their spot in the Stanley Cup Finals tonight in Game 5 against the New York Islanders.

Tampa Bay holds a 3-1 series lead after establishing control of the Eastern Conference Finals early on in Game 1.

Get to the Point

The Lightning’s Game 4 victory made one thing clear, get the puck to Brayden Point.

Throughout the series, Point has been a constant powerhouse on the Lightning offense. Furthermore, Point leads Tampa Bay in postseason total points (25) and postseason goals (9).

Besides Point, the Lightning have a long list of offensive playmakers. Point, in combination with Ondrej Palat and Nikita Kucherov, has been able to elevate the offense.

Kucherov ties Point in postseason total points (25) and leads the Lightning in assists (19). In addition, Palat has accounted for eight goals and five assists in the postseason.

The offensive success for the Lightning extends beyond these three. Tampa Bay has combined for 17 goals against the Islanders with ten players scoring at least one.

Tampa Bay Lightning head coach Jon Cooper comments on the success of his forwards throughout the series.

In February, the Lightning picked up a young forward in former San Jose Shark Barclay Goodrow.

The forward hasn’t shined as brightly in the series against the Islanders. However, Goodrow provided a game-securing assist in the Game 2 setting up a Victor Hedman goal that pushed the Lightning, 2-1, over New York.

The Islanders have continued to look drained against the Lightning after coming off of a seven-game series against the Philadelphia Flyers.

New York has been outplayed and outscored by a quick Tampa Bay offense. The Islanders have managed to score only four goals in the series.

In order to stay alive in the series, the Islanders will have to make offensive adjustments and find a way to slow the success of the Lightning forwards.

“We’re not going to go away lightly here. The Eastern Conference Final is exactly where we want to be right now. What an opportunity for our group. We’re going to come out swinging tomorrow and give it our best.”

The Lightning look to join the Dallas Stars in the Stanley Cup Finals while the Islanders look to stay in the playoffs in tonight’s meeting.

The puck hits the ice for Game 5 of the Eastern Conference Finals tonight at 8 p.m.