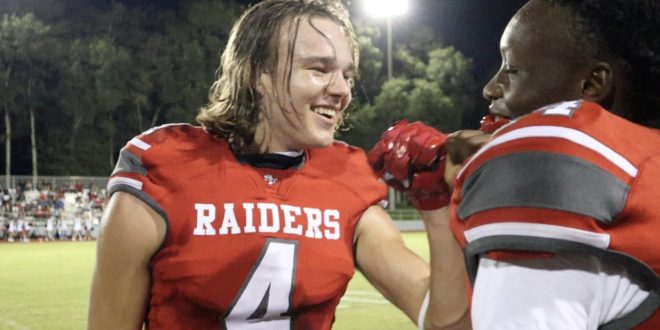 “This may be the best quarterback we are facing this year, I don’t think we are going to see a better individual than Tyler all year.”

These words were echoed through the weight room by Coach Allen before Friday’s game. Standing at 6’2 220 lbs Tyler Jefferson is the sophomore quarterback of the Fort White Indians. He only needed three varsity starts to receive offers from UCONN, Maryland, and Kentucky. His ability to pick apart defensives from his calm and methodical plays but creative explosive plays can be a nightmare for opposing defenses. Santa Fe was tasked with slowing down the electric dual-threat quarterback.

Friday’s matchup was the Fort White’s season opener as they faced Santa Fe away. The Indians entered the contest with only eight days of practice because of COVID restrictions. On the Santa Fe side, they entered this game 0-2 with losses to Gainesville High School and Suwannee High School searching for their first win of the season.

Santa Fe began the game with a roughing the passer penalty which ended a potential 3 and out. Nevertheless, they stopped on the very next set of downs. Penalties were a theme in this game as both teams had 13 each before the end of the half. A Fort white fumble impeded any initial momentum and in return, Santa Fe’s Quarterback Landon Rodgers came up with a big 4th down conversion to put Santa Fe in the Red Zone. However, Santa Fe’s own fumble stalled any scoring in the first quarter.

The second quarter was the exact opposite as a 15-yard gain set up a short passing touchdown to wide receiver Gerrell Richardson. Fort White Indians would bounce back after a 45-yard bomb to put the team on the 1-yard line. Jefferson then punched it in on the one-yard score on the quarterback keeper to put the game at 7-7.

Santa Fe then scored 19 unanswered to put the game out of reach. An electric 35-yard scamper from Dontrelle Jenkins in the 2nd made the game 14 to 7. This score was followed by a Ladon Rogers Quarterback run to make it 20 to 7 in the third. Their scoring streak was capped off by a Willie Louis touchdown from Rogers. Willie was flagged for an unsportsmanlike conduct penalty for his celebrations in the end zone.

“The Unsportman-like conduct penalty was definitely worth it, the guys loved it hyped them up. The coaches didn’t love it, but it’s part of the game … (it’s a morale move) Yeah!”

Fort White would score again but it was little too late as the Raiders defeated the Indians 26 to 14.

To start the game defensive captain Balin Strickland set the tone for the Raiders and they never looked back. The defense held the Fort White Indians to 14 points. Franklin Richardson had two interceptions in the game putting his total to three for the season in three games. Wyatt Todd also provided a fumble recovery.

“Excited for our offensevive line tonight we challenged them all week, showed them that they were a real reason for why we lost that GHS game (Gainesville Highschool) and they stepped up huge for us tonight.”

Overall, a team win propelled Santa Fe to their first win of the season, and Allen’s first win as the Raiders head coach. 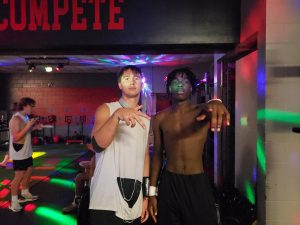 During his inaugural season, Coach Allen has decided to take a page out of UNC’s head coach Will Healy off the field. After win’s the team’s weight room is transformed into a dance party where the team can celebrate with flashing lights, food, and music. Club Red has DJ equipment and disco lights bought by Coach Allen where his team can come to celebrate after a victory. Something unseen by any other high school team around Alachua County. The Raiders hope to be back at Club Red after they play P.K Yonge at home on the 25th.

Ethan Sanabria is a second-year telecommunications student on the digital film and television production track at the University of Florida's College of Journalism and Communications. He has previously worked as a broadcaster for the Florida Flight basketball team and currently helps the production of WUFT news facebook lives. You can reach Ethan on any of his social media or at Ethansanabria@ufl.edu.
@ethansanabria
Previous Seminole crushes Gainesville on Hurricanes senior night
Next Newberry Panthers Get Quick Lead in First Quarter, Maintain Control to Beat Union County