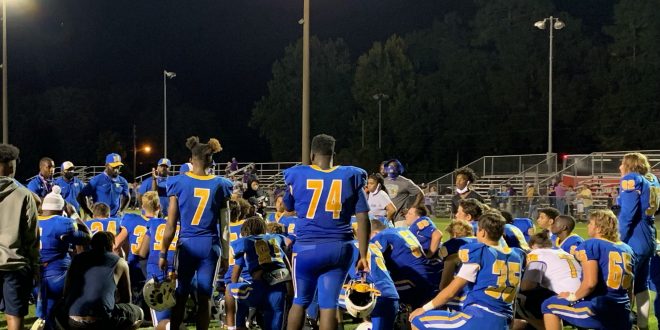 By Mariel White and Hannah White

Continuing the momentum from last week’s win, the Panthers got an early jump on the Fightin’ Tigers. Newberry moved the ball downfield quickly on their first possession, topping it off with a fourth and one rushing touchdown by senior quarterback Makai Johnson. Following a turnover from Union County, Newberry scored on their second possession with a 3rd and goal passing touchdown, bringing the Panthers’ lead to 13-0 and making them two for two in the red zone.

The Panthers’ defense was also off to a strong start with junior linebacker Jarell Thomas making some impactful tackles. The Panthers put heavy pressure on the Fightin’ Tigers quarterback, forcing him out of the pocket to make several incomplete passes. Newberry’s defense held Union County out of the red zone in the first quarter. A high snap by the Fightin’ Tigers was recovered in the endzone, resulting in a safety. The tackle made by junior safety Thad Rucker brought the Panthers to a 15-0 lead going into the half.

A Back-and-Forth Second Half

Although quarterback Makai Johnson kept the team motivated at half time by reminding them to “rely on what we do in practice” and “go hard so we can finish out [the] game,” the Panthers got comfortable in their early lead and struggled to keep the momentum going into the second half.

Union County scored early in the third quarter with an interception returned for a touchdown. The Fightin’ Tigers went for the two-point conversion, narrowing the Panthers’ lead 15-8.

Newberry answered on the following drive with a rushing touchdown by senior running back Kobe Delima. The Panthers regained their double-digit lead, 22-8.

Union County fumbled on the punt return following Newberry’s touchdown but was able to recover the football and break through defenders to run it back for a touchdown. At the end of the third quarter, the Panthers led 22-15. Newberry’s offense was in control most of the fourth quarter but finally turned over the ball to the Tigers with 2:01 left in the game, giving them the chance to tie or win the game.

Union County attempted a fourth-down conversion but the Panthers got the ball back in the red zone and scored a rushing touchdown, making their lead 28-15. The Fightin’ Tigers ended the game with a final touchdown, but Newberry maintained their lead, 28-21.

This game saw several lateral passes from QB Johnson to running back Delima and wide receiver Justen Crews that ultimately resulted in yardage gains. Johnson received many high snaps but didn’t let it stop him from maintaining the lead. Both teams kept their cool in the first half, but the second half saw more penalties on both sides.

Head Coach Edward Johnson said his plans for practice this week include eliminating turnovers, completing the game, and going for four quarters. Despite the errors and penalties, he is pleased with his team’s performance Friday night.

The Newberry Panthers will face the Taylor High School Wildcats at home next Friday, Sept. 25, at 7:30 p.m.

Mariel White is a Sports Management student at the University of Florida.
Previous Coach Allen Wins His First Game as a Santa Fe Raiders Coach
Next Bryson DeChambeau Wins The US Open 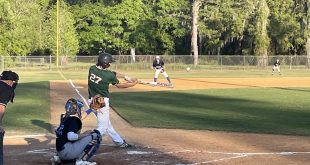