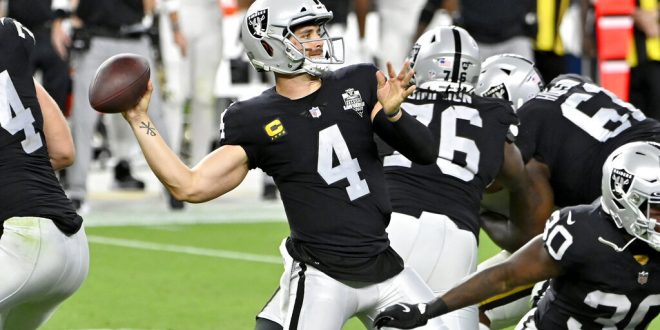 The Las Vegas Raiders are now 2-0 after defeating the New Orleans Saints 34-24. This is the fourth time in the past 25 seasons in which the Raiders have a 2-0 start to their season.

Las Vegas quarterback, Derek Carr, led his team to victory with three touchdown passes. He was in control for most of the game, completing 28 of his 38 passes.

Carr’s trusted teammate in this game was tight end Darren Waller who had 12 interceptions for 103 yards.

New Orleans dominated the first quarter by scoring 10 points while stopping the Raiders from scoring anything. After this, Carr took control of the game, leading four straight scoring drives. These led to a change in the lead, with the Raiders now on top with a 24-17 score.

On the other side of the ball, Saints quarterback Drew Brees and his team seemed to be out of sync.

Brees is averaging 4.82 air yards on passes so far this season. This is the lowest of any quarterback through two games since Brett Favre in 2009.

When asked about this, Brees laughed as he said that he was not worried about how many yards he can throw. Instead, the Super Bowl XLIV MVP is more worried about his decision-making and his ability to deliver plays.

After the game, Brees mentioned that their biggest struggle was getting in sync. He said that they struggled mentally which affected their offensive plays.

But the offense was not the only thing that was struggling. New Orleans’ defense was not able to stop the Raiders, as they allowed Las Vegas to convert 10 of 17 third downs.

The Raiders also successfully went for it twice in two fourth downs. They even recovered from a fumble and scored on the ensuing drive on a 20-yard run. This struggle might have come as a surprise for many, even for the Raider’s head coach Jon Gruden who recognized the amount of talent the Saint’s defensive line possesses.

Gruden also recognized that this win was accomplished by teamwork. He acknowledges that many different players stepped up in order to get the win.

New Stadium with no fans

The Raiders’ win served as a proper inauguration for their new Allegiant Stadium. Even though it was a sweet win, there was no live audience to witness it. Gruden said that he cannot wait to have the fans back so they can enjoy their new stadium while they cheer on the Raiders.

“We can’t wait to get them back in this place. It’s such a great place to see a game” said Gruden.

As for the no fans guideline, New Orleans head coach Sean Payton also had some input. Before the game, Payton said that playing without fans would be “different” and that it would feel like a practice environment.

The Raiders will travel to New England to face the Patriots on Sunday, September 27. Tip-off is scheduled for 10 am. New Orleans will go back home to host the Green Bay Packers. Their match will also be on Sunday, and kickoff is set for 8:30 pm.

Camila is a senior at the University of Florida, who served as a beat writer for the women's basketball team from 2019 until the 2021 season. She was also a beat writer for the Gators football team during the 2020 season. Camila is also WUFT's news director as well as a sports reporter/anchor.
@CamilaMaffuz
Previous Mullen Talks Preparations for 2020 Season Opener
Next Tampa Bay Lightning Even Stanley Cup Final Series Against Dallas Stars