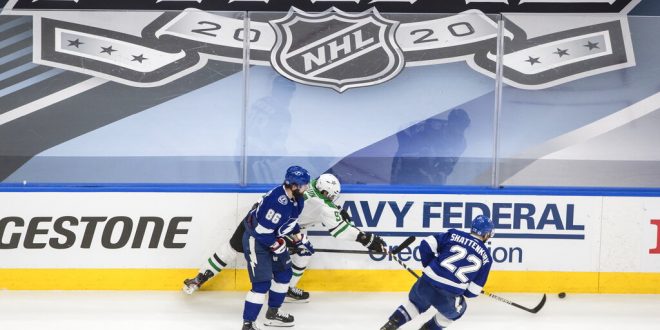 The Tampa Bay Lightning evened the series in their Stanley Cup Final battle against the Dallas Stars.

The Stars took the series lead in a dominate Game 1 performance over the Lightning. Tampa Bay’s 3-2 win over Dallas even the series at one game apiece.

The Lightning secured Game 2 within a four-minute span in the first period. Three consecutive goals from Tampa’s Brayden Point, Ondrej Palat, and Kevin Shattenkirk gave the Bolts a three-goal lead the Stars would never recover from.

Tampa’s early lead, and many other points, can be attributed to the Lightning’s Nikita Kucherov. In his seventh season with the Bolts, the Tampa Bay winger set a new postseason record.

After two first period assists, Kucherov broke the Tampa Bay Lightning record for most points in a postseason. Furthermore, with six goals and 22 assists in the postseason, Kucherov has cemented his legacy in the Tampa Bay record books with 28 points.

Kucherov has been a dominate factor for the Lightning offense throughout the season. Additionally, Kucherov leads the Lightning in goals (33), assists (52) and points (85) this season.

A Look at Game Three

The Dallas Stars know how to hold off a strong Tampa Bay offense. The Stars held the Bolts to one goal in Game 1.

A total momentum shift in the Lightning offense proved to be the key difference in the success of Tampa Bay in Game 2.

Lightning center Brayden Point has been one of the biggest difference-makers for the Tampa Bay offense this postseason. With 10 goals and 16 assists, Point has proven he can make it count when he has control of the puck.

Goal No. 10 for Brayden Point was an easy candidate for Shot of the Night. #StanleyCup

In order for the Lightning to repeat the success of Game 2, the Bolts will offense will have to start off strong and make each possession count.

The Lightning return to the ice for Game 3 of the Stanley Cup Finals on Sept. 23 at 8 p.m.